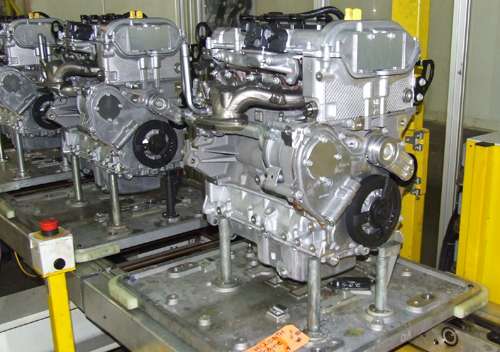 GM is touting the fact that its General Motor Spring Hill powertrain plant produced its 3-millionth Ecotec engine this week but the bigger story is really the fact that is has produced 1 million of the engines in the last 30 months alone.
Advertisement

“The investment in the Spring Hill engine plant is allowing us to meet the growing needs of customers for high-quality, fuel-efficient vehicles,” said GM Spring Hill Complex Manager Ken Knight. “Consumers and critics love these engines for their fuel efficiency and power. In 2010 and 2012, WardsAuto named the engines we manufacture one of the ‘10 Best Engines’ for North America.”

The GM Spring Hill Manufacturing facility is located in Spring Hill, Tenn. It was best known as the Saturn plant for many years until that brand folded in 2007. Currently, the 6.9 million sq. ft. site manufacturing operations consist of an engine plant making 4-cylinder engines, a stamping plant, two polymer injection molding operations and one painting operation for bumper fascias that covers 2100 acres.

These manufactured engines and other components are supplied to various GM assembly plants across the globe. On Nov. 21, 2011, GM announced that it would reopen the assembly plant as one of the world’s most flexible manufacturing facilities capable of building any GM car or crossover based on customer demand or manufacturing need. It will begin producing the hot-selling Chevrolet Equinox during the second half of 2012.

A new Ecotec new 2.5L will be available next summer, marking the debut of the all-new Ecotec engine family. Increased efficiency was the top development priority, achieved in part through lower engine friction. It was reduced by an average of 16 percent across the entire speed range, using new technologies such as a variable-displacement oil pump and an actively controlled thermostat. GM proprietary computational fluid dynamics (CFD) analysis techniques were used to develop an all-new combustion system with a higher compression ratio, which also helped boost efficiency.