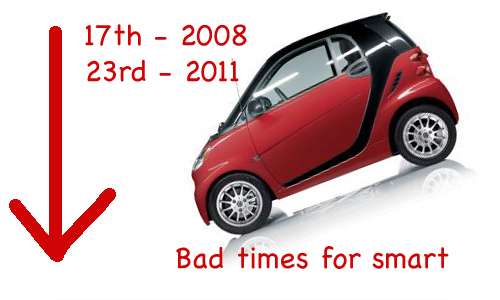 Ford and Kia prosper with Hyundai; Smart and Scion plummet in perceived quality

Automotive Leasing Guide's three year study of perceived quality bodes well for Ford, Kia and Hyundai who prosper but shows impending doom for smart, Scion, Mini and Mitsubishi who all plummet from 2008 to 2011.
Advertisement

Twenty-three brands that were in the survey in the fall of 2008 are still in business. Of those, four have made large spikes in rank in the mainstream sector. Hyundai pole vaulted from 18th to 9th place. Ford cars and trucks moved from 15th to 7th and 8th to 3rd, according to ALG. Jumping up from last place, the 23rd spot, was Kia. It's still not in great position at 18th but that number is bound to change. Maybe it will be in 9th place like its sibling company, Hyundai, in three years' time.

Of the four, the two most surprising on that list are Mini and Scion, especially the latter, which is made by Toyota – the number 2 company on the mainstream list. Its Lexus brand, see below, is number one on the luxury list. Mini may be suffering from over-exposure because it is throwing so many brands on the market. Its parent company, BMW, is number two on the luxury list.

Not as surprising to see smart on the list because it has never been perceived as a good car. Nobody has ever said, "Sure, it gets lousy gas mileage, is impractical, and a potential death trap, but at least it's well made." Mitsubishi, in spite of making the well received Outlander Sport, just seems to be on a death spiral. The company talks about strong year-over-year sales growth percentages but those figures are misleading. It will be fortunate to sell 100,000 vehicles this year with one in 8 of those being the Outlander Sport.

Its vehicles may be as bland as milk toast, but Honda's perceived quality continues to prosper. It finds itself at the top of the list for the fall of 2011, followed by Toyota, which just demonstrates how short a memory the American public has. Just 18 months ago, people were treating Toyota as toxic property. Now all is good again. ALG predicts Toyota could soon regain the top spot from Honda.

On the luxury side, the top brands in order are Lexus, Mercedes, and BMW. The next three spots are filled by Porsche, Acura and Infiniti. Saab is the only company to show a significant decline since 2008 in perceived quality, which isn't a surprise considering it's not really currently in the business of building new vehicles.

The rock bottom luxury brands in the Fall 2011 Perceived Quality Study are Jaguar, Land Rover and Alfa Romeo. For reasons unknown, ALG included Alfa Romeo in the study in spite of two major factors: the company hasn't sold new cars in the U.S, since 1995 and doesn't plan to sell new cars again until the third quarter of 2013 – or about two years down the road.

Alfa Romeo should pay attention to this perceived quality study and start its marketing campaign now. It's been given ample warning that Americans don't have fond memories of its products.

Tsingshan's Threat to Tesla: EV Maker Is In Battery Crosshairs
Tesla-Funded Research Reveals One of The Biggest Mysteries of EV Battery
END_OF_DOCUMENT_TOKEN_TO_BE_REPLACED