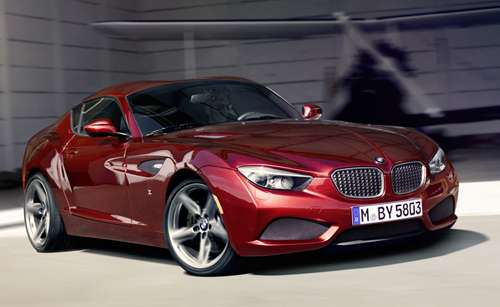 Milan coachbuilder Zagato and BMW are teaming up to introduce the BMW Zagato Coupe this weekend at the Concorso d’Eleganza Villa d’Este.
Advertisement

Don't look for the BMW Zagato Coupe to grace the showroom of your local BMW dealer any time soon. It's a one-off model that is the product of many hours of skilled hand-craftsmanship. BMW says it " breathes new life into the tradition of coachbuilding."

However, just because it's a one-off doesn't mean it's a concept. It's registered for road use and meets worldwide standards. It is relatively easy to build a design study which is not intended for use on the road. Not having to meet any stipulations governing crash safety or pedestrian protection opens up a host of new avenues in terms of design,” said Dr. Andrea Zagato, the head of Zagato. “The challenge lies in injecting the emotional appeal of a concept car into a road-legal machine. And we think we have succeeded in doing just that with the BMW Zagato Coupé.”

The body of the BMW Zagato Coupé has been built entirely by hand. As in the past, the new skin was tailored to fit the car’s mechanical architecture, tracing its lines yet giving it space to breathe. The Zagato experts spent many hours crafting the aluminum sheet metal by hand and meticulously molding it to give the car its unique form.

From the side, the BMW Zagato Coupé displays the pared down, clearly defined distribution of visual mass for which Zagato is renowned, blended with the familiar surface treatment and design language of a BMW. Its coupé design also necessitated a new roofline, which highlights the car’s potential with impressive fluidity and dynamic élan.

Another characteristic Zagato design theme is the specially designed “criss-cross” transition from the side windows into the rear window. The lower section of the side window surrounds slants dramatically upwards just ahead of the rear end and extends to form the upper border of the rear window. In so doing, this hallmark design element links the sides and rear via the C-pillar and ensures a harmonious connection between the different sections of the car. This aspect of the BMW Zagato Coupé design is particularly striking when viewed from above.

Distinctive Rear End
The distinctive rear end provides the clearest evidence of Zagato’s influence. Formed almost without a single joint, the rear end appears as if formed from a single mould. Nothing interrupts the flow of surfaces and the powerful sculpture of the rear. At the same time, this also provides evidence of the high degree of hand-craftsmanship involved in making the car and Zagato’s experience in the manipulation of surfaces and forms, channeled into the car’s design at the company’s studio.

The unique character of the BMW Zagato Coupé is reflected in even smaller details. The 19-inch light-alloy wheels in classically sporty five-spoke design have a hint of propeller about them, offering a subtle nod to the origins of both companies.

The Zagato Coupe is such a design exercise that BMW has not released any information on what lies underneath the hood. Something this beautiful is apparently designed to be seen and not driven.

Tesla-Funded Research Reveals One of The Biggest Mysteries of EV Battery
Tesla Tesla Buyer Nets a Whopping $12,000 Discount After Asking for Reduction
END_OF_DOCUMENT_TOKEN_TO_BE_REPLACED