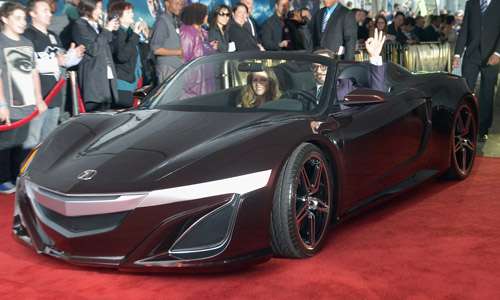 Acura Seeks to Get Mojo Back with Avengers Partnership

It looks like Acura is aiming to be the cool kid on the block by sponsoring the world premiere of The Avengers.
Advertisement

At the world premiere earlier this week, Robert Downey Jr. made quite the entrance to the red carpet in a custom Acura-created sports car. It's a car strongly influenced, one might say, by the Acura NSX concept introduced at the North American International Auto Show in Detroit.

Wait a minute? Isn't Iron Man an Audi guy? Could this be a sign that Acura just might be taking on the Germans?

Time was Acura was a cool brand. Its first-generation NSX was the definition of driving superiority with excellent acceleration and cornering grip never matched at its price point. Also, the Acura TSX used to have strong street cred and the Acura RL was a respected luxury sedan.

Then, Acura and its parent company Honda hit a design dry spell when it decided to aim straight down the middle of the road. The sales weren't affected but company officials, seeing the numbers on the wall, knew they had to do something to stay competitive with the Koreans and even domestic OEMs who were delivering great looking products at a good price.

Now hope seems to be restored with the new ILX, the RLX concept and, especially, the NSX concept. Acura may actually be getting its design mojo back somewhat. It might not have to resort to cinematic partnerships to get the car buying public's attention going forward.

"Acura is excited to continue our presence as the official vehicle of S.H.I.E.L.D. in Marvel films (Captain America: The First Avenger, THOR, and The Avengers)," said Mike Accavitti, vice president of national marketing operations, in a press release about the red carpet event. S.H.I.E.L.D. agents and Marvel's The Avengers' characters including Hawkeye and Black Widow can be seen driving militarized Acura vehicles throughout the highly anticipated film, including the MDX, ZDX and TL models, along with a cameo from the entirely new 2013 RDX.

"Marvel's The Avengers" appears poised to be a big hit with stars like Robert Downey Jr. (Iron Man), Chris Evans (Captain America), Mark Ruffalo (The Hulk), Chris Hemsworth (Thor) and Jeremy Renner (Hawkeye). It is directed by Joss Whedon, from a story by Zak Penn and Whedon with screenplay by Whedon. "Marvel's The Avengers" is based on the ever-popular Marvel comic book series "The Avengers," first published in 1963 and a comics institution ever since. Prepare yourself for an exciting event movie, packed with action and spectacular special effects, when "Marvel's The Avengers" assemble in summer 2012.