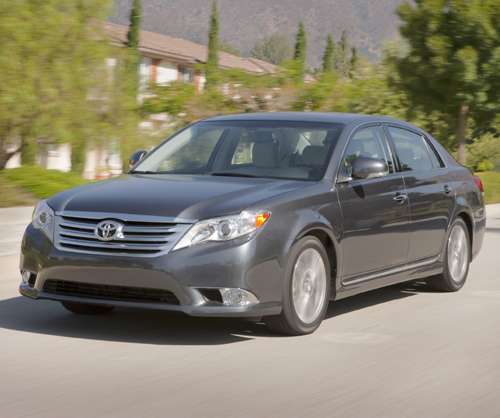 The news isn't 100 percent accurate because Toyota did have a $600 mid-2011 model year price increase in March of this year in the wake of the Tsunami and earthquake that struck Japan. So, the 2012 Toyota Avalon does cost more than the 2011 Toyota Avalons that were sold before March 31, 2011.

In addition, there are no changes to the specifications or pricing of the Options/Packages available for the 2012 Avalon. Assembly of the 2012 Avalon began on Nov. 7 at Toyota Motor Manufacturing Kentucky (TMMK).

The base 2012 Toyota Avalon has a starting price of $33,195. This grade offers a broad array of standard features such as multi-function remote keyless entry, leather-trimmed eight-way power driver’s seat, wood-grain style interior trim, and auto-dimming electrochromic rearview mirror with compass, HomeLink universal transceiver and an integrated back-up camera (on vehicles without a navigation system).

For an MSRP of $36,435, the Avalon at the Limited trim level adds a Smart Key System on four doors and trunk with remote illuminated entry function and puddle lamps, a Push Button Start, ventilated and heated front seats with variable heat setting, power rear sunshade with auto return feature, and a JBL Synthesis® AM/FM 6-disc CD changer with MP3/WMA playback capability and 660 watts of maximum power.

The MSRP for the 2012 Avalon does not include the delivery, processing, and handling (DPH) fee of $760. The DPH fee for vehicles distributed by Southeast Toyota (SET) and Gulf States Toyota (GST) may vary. The 2012 Avalon will begin arriving at Toyota dealerships by the middle of December 2011.

The Avalon is powered by a 24-valve, dual-overhead cam (DOHC) 3.5-liter V6 engine that produces 268 horsepower at 6,200 rpm and 248 lb./-ft. of torque at 4,700 RPM. The engine is equipped with the dual VVT-i electronic valve-control system that ensures a broad powerband. The six-speed automatic transmission provides an engaging driving experience and helps optimize fuel economy. Uphill/downhill shift logic selects the proper gear for driving conditions and helps provide moderate engine braking during downhill driving.

The 2012 Avalon’s EPA ratings of 20 MPG in the city 29 MPG highway match or even exceed those of midsize six-cylinder models, a testament to Toyota’s technology. The Avalon is certified as an Ultra Low Emission Vehicle (ULEV).