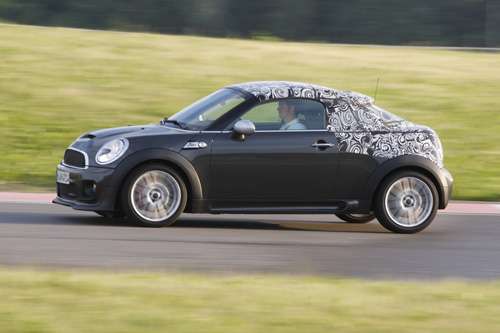 Mini, one of the smallest cars in the North American market, has finally come out with the model it should have had all along: a 2012 Mini coupe, the first two-seater in its lineup.
Advertisement

At a time when Mini is moving upsize (relatively speaking) with models like the Clubman, Mini has come out with a model mostly aimed at the weekend racing class. This new Mini coupe, with its selection of engines, chassis set-up, weight distribution and aerodynamic properties, is focused on delivering optimum performance and is the fastest-accelerating MINI ever and has the highest top speed.

That top speed is going to come courtesy of the MINI John Cooper Works Coupe that produces 208 hp from a 1.6-liter four-cylinder gas engine with twin-scroll turbocharger and direct injection, plus numerous technological details carried over directly from motorsports. Even the Mini Coupe S will put out a respectable 181 horsepower from its 1.6-liter four-cylinder gas engine with twin-scroll turbocharger, direct injection and fully variable valve management based on the BMW Group’s valvetronic technology.

Estimated 0-60 time is 6.1 seconds for the Cooper Works Coupe. The two base models both come equipped standard with six-speed manual transmissions with a six-speed automatic transmission optional.

Mini is being somewhat coy with this new coupe. No pictures of the U.S. model are being released yet, nor is an on-sale date for the new coupe. The picture accompanying this article, with accompanying camouflage, is from the United Kingdom BMW media site, which reveals a diesel SD model with four-cylinder turbodiesel engine with aluminium crankcase, common-rail injection and variable turbine geometry and a stunning combined fuel economy of 65.7 mpg and a 0-60 time of about 7.8 seconds.

Tud0r wrote on June 6, 2011 - 10:34am Permalink
... aaaand as usual, us North Americans won't be getting the Diesel model blah blah blah, even though year over year there is a 500% in Diesel car purchases here, nevermind being better for the environment, more efficient, more torque, which North Americans do not understand that it is better than have more HP. Oh well, such is life. I'll keep driving my 1999 Acura 2.3CL VTEC 5 spd until I find some inspiring Diesel car worth purchasing here.