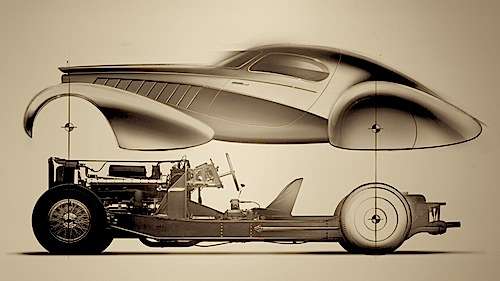 The thorny issue of collector car authenticity is one that sparks many debates and not too often will you hear about someone who takes up the challenge to body an un-bodied Bugatti. Today, is that day.
Advertisement

There were only 3 Type 64 Bugatti built in 1939 but only two of them received a body. To put things into perspective, most Bugattis back then were race cars that could receive a special body from an illustrious coach maker and driven on streets. These were the days of luscious lines, elegant drop tails and curves that enticed passion, something we seemed to have lost these days. So what of this particular Type 64? It will finally be clothed.

Back in 2002, the naked Bugatti chassis 64002 won an exclusive Pebble Beach Concours d’Elegance award and Mr. Mullin bought it a year later. Peter Mullin is no stranger to collect cars since he is the owner of the Oxnard, California Mullin Automotive Museum.

Aesthetically Speaking. According to sources, this Type 64 was bought with a 3.3 double overhead cams straight-eight. However, the normal Type 64 came, to my knowledge with the larger 4.5-liter DOHC straight-eight that was rated back then at 170 hp... Did I mention this was 1939? The chassis was an updated wider take on the Type 57 that kept the same 130-inch length but was strengthened and lightened giving the car a theoretical 120 mph top speed.

All it needed now was to design a body worthy of what Jean Bugatti would have imagined, period correct. The problem is, following in the footsteps of Jean Bugatti and the continuation of the elegant Type 57 various bodies is no small task. This would be done with the help of Stewart Reed from the Art Center College of Design, Pasadena, California and eight lucky chosen Art Center students. True to Bugatti heritage of the time, the car will bodied in aluminum. Now comes the coach building part, where Mike Kleeves of Automobile Metal Shaping will transform the drawing to reality.

Gullwing, Or No Gullwing. Much brouhaha has come about when the notion of Gullwing floated around the new body for this Type 64. However, it would seem Jean Bugatti was hinting in that direction, predating by about 15 years another famous Gullwing car, the Mercedes 300 SL.

For now, the car is on display at the Mullin Automotive Museum where you can see the step by step design of the new body. As to the purist question, should a car be changed or left original, it’s one of taste, culture and obviously resources. European collectors tend to leave their cars alone, unmolested and period correct, or as the French say: “dans leur jus.”, crudely translated as left intact, or in their fluids. On our continent, we tend to restore cars as much as possible, some would say even better than when new. In this case, this seems to be no different than someone fitting an Alfa Romeo 6C 1750 Grand Sport with a Torpedo coach. As long as the original parts remain and hopefully the original body is kept intake, the value of the car should not be diminished. This Type 64 is a little different, since it never had a body, fitting one, as long as it doesn’t change the underlying chassis shouldn’t devaluate it. Yet the real questions remains, what will the owner of the last un-bodied Bugatti Type 64 do? Me thinks, it will be kept the way it is.

LG's New EV Battery Plant Is a Welcome News for Tesla
Tesla Giga Berlin's New Hurdle: It's Not Only the Gov't, but Now Tesla Itself
END_OF_DOCUMENT_TOKEN_TO_BE_REPLACED