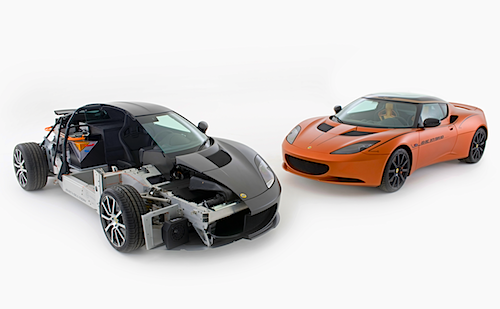 Lotus Evora 414E Getting Ready to Blow Your Mind

One of the enduring enigma of the car industry is why Lotus hasn’t developed an electric car, EV or at the very least a hybrid, HEV and even better a plug-in hybrid, PHEV. The Evora 414E answers that question and shows a lot of potential.
Advertisement

When we think of Lotus, we think of efficient, light and high performance cars. After all Colin Chapman had it right, weight is the enemy. Lower weight and you lower consumption, which lowers weight of fuel onboard. Lower weight and there is less to keep on track when cornering, therefore reducing supersession constraints and wheel weight. While this now seems like a no-brainer, it was almost revolutionary in the 50s, certainly in the commercial vehicle field.

Technically Speaking. The Evora 414E is a series plug-in hybrid that sports 2 electric motor driving the rear wheels through a Xtrac transmission. The lithium polymer battery pack is charged either by the Lotus engine or directly via an electric outlet. The 3-cylinder engine has been designed as a range extender and can run on either gasoline or renewable bio alcohol fuels, such as methanol and ethanol. It drives an EVO electric generator which either charges the battery pack or powers the EVO traction motors directly. In normal driving mode the Evora 414E can run on electricity alone for up to 30 miles, 48 km but once the range extender configuration kicks in, the electric motors power the vehicle producing only just 55 g of CO2 / km emissions on the Northern European Driving Cycle (NEDC).

And for those of you who still feel a need for testosterone noise when driving a hybrid or an electric car, the Lotus team has devised an intelligent system that lets you choose from a V6, V12 or futurist sounds. The sound matches your accelerator pedal thrust and gear shifting.

So the real question is, is Lotus getting ready to deliver on the promise of highly efficient plug-in hybrid? All indication seems to point toward the assumption. It would make sense for the company who revolutionized the world of racing in the 50s to have a light car that makes use of the latest alternative energy drivetrain. A Lotus Evora 414E is the forerunner of what made Lotus the car company it was, innovative, light, powerful and darn amazing handling.

Toyota's First EV Will Have a Name of BZ: Toyota BZ
First Videos From Inside The Boring Company's Las Vegas Loop
END_OF_DOCUMENT_TOKEN_TO_BE_REPLACED