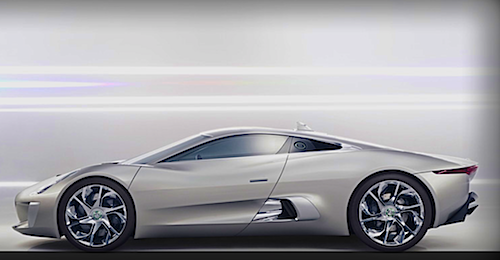 Jaguar stunned us a few months ago with its amazing C-X75 plug-in hybrid concept. Now the famous carmaker announces up to 200 C-X75 of these plug-in hybrids.
Advertisement

Just ahead of the Paris Auto Show, Jaguar has given its go ahead to build five C-X75 plug-in hybrid, PHEV “hypercars” to test the mass appeal and target it to the right people. In fact, according to Bob Joyce, Jaguar Land Rover's group engineering director, if the project is satisfactory and brings the right feedback, Jaguar is ready to build 200 of them.

At $1.1-1.4 million, you can understand why the company is tentative but hopeful as to the future of this hyper-super car. If it does go ahead, the estimate sale date would be around 2014. With Porsche aiming for 918 of its 918 Spyder hybrid at $845,000 plus tax (cute!), Jaguar will find it has competition to deal with. If Infiniti does decide to produce its Emerg-e and Audi finalizes its plug-in hybrid version of its e-tron, we will see a crowded alternative energy super car market.

Technically Speaking. With a 0 to 60 mph achieved in less than 3 seconds, the 0-100 mph is also sprint in no less than 6 seconds. Its electric range is estimated at only 37 miles. The only difference with the original prototype is that the turbines gave way to a high-output gasoline engine mated to a seven-speed automated manual transmission will be present. All of this rests on a carbon-fiber structure and body, while the front and rear crash structures are made from aluminum.

The lithium-ion battery relies on a control technology that allows for greater charge density. The 15 kW-hrs battery pack weighs in at only 440 Lbs. Indeed, the gasoline engine has a truly phenomenal high-output. The 1.6-liter gasoline engine revs to 10,000 rpm and makes an astonishing 500+ hp. All of this is due to a supercharger operating below 5000 rpm, and a turbo kicks in above. Interestingly enough, the engine manages to use both direct and a port gasoline-injection system.

With this configuration, it seems the C-X75 PHEV will run both as a series and parallel plug-in hybrid. Since such a high yield gasoline engine would be wasted as purely a generator, its tremendous output serves a better purpose maintaining the car at high speed. One question though, Oh Ferrari, where are you?

In the tradition of its XJ220, this Jaguar rekindles with its history of performance, and dare we hope race. Needless to say, what would we give to have a few hours at the wheel of this stunning Jaguar C-X75 PHEV due out in two years.