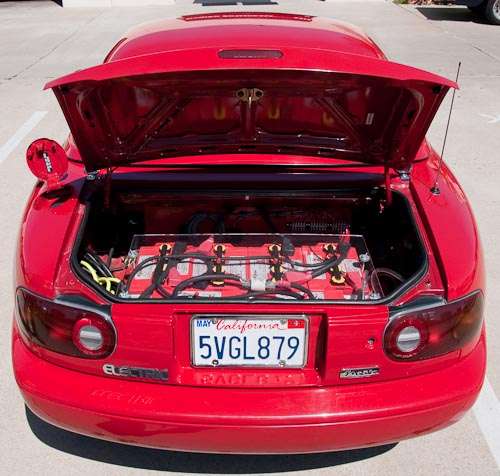 If A New Electric Car Is Too Expensive, Build Your Own

If electric cars are expensive so far, the choice is growing, so is the affordability. But if $30,000 is still too much, then how about converting your own oldie into an EV?
Advertisement

Hearing the litany of complaint around the high price of most electric cars, it makes you wonder why electric car conversion shops haven’t blossomed more and why are we not seeing more drivers taking matters into their own hands. I’m guilty as charged. I’ve been toying with turning one of my 1974 Alfa Romeo Spider into and electric car, EV.

Discarded Old Cars. If you go to an electric car event, chances are you will find someone who converted a car into an electric one. By now the secret out, Geo Metros are getting scarce and highly sought after. Some of them have shed their pistons and use an electric motor.

According to VentureBeat, David Brown brings to the Defcon hacker conference in Las Vegas his retrofitted “Voltswagon”1974 Volkswagen Beetle. How fitting for a hacker’s convention. Our very own David Herron converted a Karman Ghia to electricity, apparently catching a lot of glimpses. Another local around here converted a Geo Metro and drives it to work for pennies a mile.

I also covered elsewhere another great conversion candidate, the Mazda Miata. Called the Electric Cutie, this little project has upgraded its original gel-pack battery pack lithium. The original pack gave it 60 miles, the new lithium one, which cost slightly more than the original gel-pack not only offer a better range, but the car is once again lighter.

Whiles these cars make sense, there are other projects that should raise your eyebrows. How about a Mercedes 300 SL from 1952 whose first owner decided to give it an electric heart? This is a gutsy leap and certainly shows a certain amount of faith since recently a 1955 Mercedes-Benz 300SL Gullwing, went for $4.62 at the Gooding & Co., Scottsdale, Arizona auction. Granted it was special, one of 29 alloy-bodied Gullwings produced and highly sought out, but in general, Gullwings run around $400,000 in great shape.

While the Mitsubishi i MiEV can be bought for less than $30,000, the price drops down to around $21,625 and even lower in certain areas, as far down as $17,000. Converting an old classic to electricity makes sense to some, depending on your emotional attachment. While I have no problem looking for a discarded Alfa Romeo Spider shell to convert, I would have second thoughts doing the same on a step nose GTV.

In the end, $30,000 to go around town is just the beginning of a new technology hitting the road with bells and whistles. If that is too much, you could pick up a $500 junkyard queen and bring it to a shop that will give you 40 to 60 miles with a $10,000 conversion or do it yourself from $1,500 to how much you would like to spend.