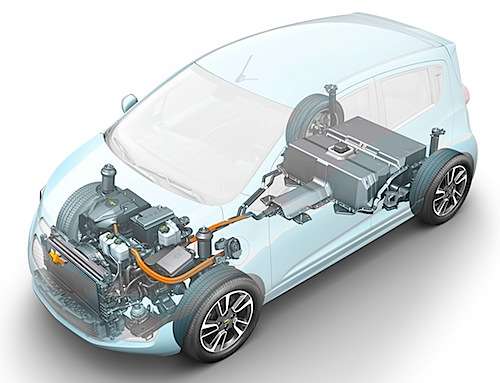 Will the Spark EV change your mind about GM? Will it be the electric car that launches it back positively forward? And if the Volt is an “electric car”, what is the Spark EV?
Advertisement

Spark EV Will Debut Next Year. A while back, GM announced it had an electric car in China but had no plans to bring it to the US. To be fair, GM had its hands full with the introduction of the Volt. A pure electric car would have been a PR mess against the Volt Plug-In Hybrid, PHEV it insists on calling an “Extended Range Electric Vehicle”, EREV.

The Spark EV is now stated for a US introduction next year. GM’s first electric car since the ill-fated and uber famous EV-1, the Spark EV has a lot riding on its shoulders. But if the EV-1 was barebone, the Spark EV will go head to head with the likes of Nissan’s Leaf, Mitsubishi’s i MiEV, CODa’s electric car and Honda’s Fit EV.

Discreetly announcing its release last week, in fact so discreetly many missed it, it seemed GM has gone as far as making sure it lowered expectations as much as possible by saying: "It will be sold in limited quantities in select U.S. and global markets starting in 2013, including California," the company said. What a difference from the firm’s usual powerful PR marketing behemoth that dazzles us.

A123 Systems Problem. Could the well publicized problems A123 Systems be at the root of GM’s reluctance to openly embrace its own electric car? Maybe but the advanced nanophosphate lithium-ion battery pack from A123 Systems will remain even though GM’s sunk $7 million into another Made in the USA battery company called Envia Systems, which promises major breakthroughs in range, cost and energy density. Recently GM’s CEO Akerson released another tidbit: "I think we've got better than a 50-50 chance to develop a car that will go to 200 miles on a charge (with Envia batteries). That would be a game changer....These little companies come out of nowhere, and they surprise you." Indeed, it not only did surprise us, it also shows how GM is spreading it bets. See David Herron’s article: GM's Akerson promises 200 mile range electric car in a few years

California Compliance Car? Is GM just playing the California "compliance car" game designed to meet the state’s stringent zero-emission requirements? The Spark EV is starting to look more and more like a "we've got one too, but we don’t know which battery pack to use". In essence, the Spark EV could be the great car that appeals to a market segment GM has long forgotten, the first car buyer, 20-something generation.

Maybe GM is binding its time until Envia can actually give a $20,000 with a 200 to 300 mile range. With the Spark EV, GM is sitting on a great little electric car that could propel it positively into the limelight.