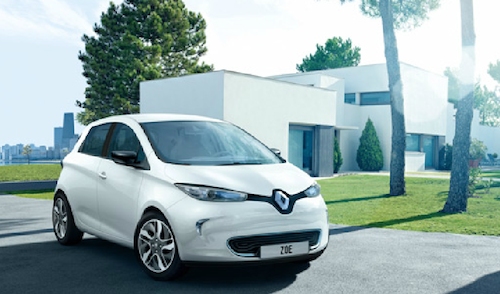 When we think of electric cars the idea of long run and range doesn’t pop to our minds easily. While most gasoline powered cars get 350 miles from a tank of gasoline, 400 to 450 for exceptionally frugal ones, EV are playing catch up in inventive ways. After all, electric plugs abound. So hearing that an electric car has beaten a log distance timed record can only help to re-establish its relevance.

Renault’s Electric Zoe Goes The Distance. The Renault electric Zoe, part of a range of electric cars the French company has to offer has just broken a record, 994.19 miles in 24 hours. On June 2nd in Aubevoye, Normandie, France, the electric Renault Zoe broke the previous record of 776.71 in a 24 hour run. The electric Zoe was recharged during the run.

The Zoe is a compact car sporting a 65kW, 87 hp electric motor with 162.26 of lb ft of torque. The 93 miles range or 130 in NEDC cycle is achieved with a 22 kWh lithium ion battery pack and with a trio of technology, called the Range OptimiZEr. This combines Renault’s new-generation regenerative braking, a heat pump and Michelin EnergyTM E-V tires.

Renault’s Other EVs. Renault will also introduce three other EVs, all designed with different purposes in mind. The Twizy is an ultra-compact EV designed mostly for urban runs. It sports a 15kW, 20hp motor and a version that requires no license with a 4kW, 5hp motor. The Twizy holds a small 7kWh lithium-ion battery located underneath the front seat which gives it roughly a 60 mile range.

The larger Fluence Z.E. is a small sedan in US terms and mid-size for Europe. It will sell for the same price as its gasoline equivalent and sports a peak power out put of 70kW, about 94 hp at 3,000rpm with a maximum torque of 226Nm, 167 lb ft. Its lithium-ion battery is rated at 22kWh giving the car a range approximately 115 miles.

The Kangoo Z.E. is aimed at light commercial applications, much as the Ford Connect Transit. Powered by a 44kW electric motor giving 166.68 lb ft of torque using a 22kWh lithium-ion battery pack located beneath the cargo floor that doesn’t change the original volume capacity. The range is estimated at 105.63 miles, depending on condition and driving styles.

This is an interesting record for an electric car, usually not associated with range. Although the car recharged several time to achieve this record, it is the beginning of real life test data for endurance within a 24 hour limit time.

Paul Felix Schott wrote on June 12, 2012 - 7:29pm Permalink
Energy has driven the world for over a thousand years Wind, Hydro and Solar are the oldest forms of energy giving power to all smart enough to use it. In the last 200 years Coal, Oil and Nuclear has given energy to many worldwide and great power and wealth to only a few. At the cost of many lives in coal Mines, Oil Spills, Radiation, Cancer and Polluting the Air and Water on all of the Earth. Unfortunately for the wicked there is not an unlimited amount of oil on earth. Just the same as the Forest Trees that clean the air and make Oxygen we breath and all living on earth need to Live. As some in denial are not able to recognize or ever see or live with blinders on. Doctors and Drug ceo's have been making millions prescribing drugs to many that live near or by High polluted areas that hurt breathing our lungs and harm our children and all. That we all pay for. When all they need is Clean Air and Water, and Clean Cities. Now common sense would be for all to look for a clean fuel Wind, Hydro, Geothermal and Solar. Renewable Energy is eliminating the need for Dirty Energy Worldwide at a record pace. With Solar Energy Clearly the front runner. To the fear of some of the richest people on Earth. They to surprisingly are doing something extraordinary investing in Solar Energy. After years of many of them trying to under mine it. Fuel that makes energy to ship goods, or make electric for homes and manufacturing. Can transform whole nations into prosperity and wealth or poverty and economic hardships for most all. Just as taxes on taxpayers has done. For over two thousand years. Making slaves of many to the wicked and unjust few. History Lesson Roman Empire, Persian Empire now OIL Empire oh sorry OPEC. The Freedom to get your own Power from the Wind and Sun, Solar Energy has been there for years. Are Libraries and Schools should have been the first to have gone Solar and Renewable Energy. And why are they not? Churches are all over the Planet. They are going to Solar Energy. Thank GOD for the Pioneers like John Schaeffer that Started Real Goods The first and Best catalog for Renewable Energy and Scientist Bill Young at the FSEC Florida Solar Energy Center and Monica D. Key Lindbergh for many years wrote to legislators promoting Solar and Renewable Energy and many others. These Pioneers helped put Wind, Solar And Renewable Energy in the Spotlight for all the World to see. One of The Greatest Scientists ever Albert Einstein Stared it with a Dream that the day would come that all the World would use Solar Energy. His many years of work with the law of the "Photoelectric Effect", and showing this to the World won him the Nobel Prize in Physics. For the "Photoelectric Effect" Free Energy From the SUN in the heavens above. We still do not teach this to our young. Very soon Hybrid Vehicles and (EV's) Electric Vehicles will out number the ones that need oil and gas to go. With the ability to recharge them at home and work from the sun. Tesla Motors with its new Model S electric sedan, will be one of many the World will see soon. Honda, Nissan, Audi,VW, BMW and Volvo are just some of the Car Companies putting into production Electric Vehicles a EV, and many more are and many are building Electric / Hybrid Vehicles. The DeLorean Motor Company will be putting into production by 2013 a DMC-EV Electric DeLorean, that will have a body and power plant that will last you a life time. Just think you can recharge them at home and work free from the sun Solar Energy. The Lord's Little Helper Paul Felix Schott Now to own a car that will never rust way and runs on the power from the sun that's the one for me.