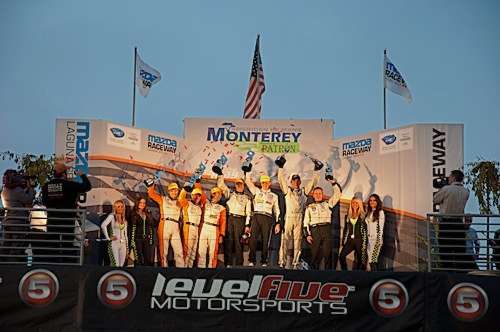 Starting on a rather fresh and very foggy day, the little Mazda MX5 are already screaming around the unique bends, twists and famed cork screw of the Laguna Seca Raceway. After that it was 6 hours of familiar faces, some returning Aston Martin and Lotus and with a touch of Hollywood with Patrick Dempsey and his team.
Advertisement

American Le Mans Series, LMP & C. The favorite to beat is still the Muscle Milk Pickett Racing team where Lucas Luhr and Klaus Graf were leading the way, in the beginning followed closely by the Dyson Racing Team in the LMP1 class that eventually finished 23rd. The LMP2 is where the race was heating up between Conquest Endurance, Dempsey Racing and the favorite, Level 5 Motorsports.

Michelin Green Challenge. The challenge within the challenge is the green challenge. Muscle Milk Picket Racing, Dempsey Racing and Core Autosport are the teams to watch in the green racing. In the warm up practice the first two spots were held by Level 5 and Core Autosport Challenge cars 05 and 7. Finally Muscle Milk Picket Racing’s number 6 Graf comes and reestablishes the pecking order. The Michelin Green Challenge victory was the sixth in MICHELIN GREEN X Challenge competition and went to the Aston Martin team and the first for the British factory based team. In second place of the MICHELIN GREEN X Challenge award and the third time was for Ferrari for the Houston based Risi Competizione Ferrari team, which took the lead in the final three laps of the race only to lose fuel pressure and drop to third at the flag.

The Test, Qualifying And Grid. The Luhr & Graf Muscle Milk Picket Racing duo have dominated the entire three days. This was followed closely by a great practice one where the Dyson Racing Team and the Conquest Endurance were showing promising results. As the day went by, the Dyson Racing Team faired very well with a second provisional grid start, followed by Level 5 Motorsports in LMP2. Unfortunately, Conquest Endurance couldn’t score any practice points and took number 34 on the provisional start. Keep you eyes on Martin Plowman whose first time at Laguna Seca shows a promising future. Asked what he thought of this amazing track, his eyes bubble and said he never knew that cork was that fantastic. Martin managed to pull out in 9th position and make his way to a stable 3rd by halfway of the race.

American Le Mans Series, GT & C. The GT races are dominated with the Corvettes again this time with stiff competition form BMW. Interestingly, both Corvettes sport different configurations, one has an engine in the front, the other in the back. And the sound different is obvious! More than halfway through the race, the BMW number 56 driven by hand was leading the Corvette number 3 driven by Garcia, only to end up behind again.

Making sense of prototypes and GTs is easy, they are the rolling test platforms for tomorrow’s cars. All unproven technologies are first thoroughly tested, then they find their places in our everyday cars. Whether seatbelts and general electronics, all these technologies started in the racing arena. While single seaters might attract the lion’s share of viewers, due to serious advertizing, the appeal of prototypes wins a core of die-hard fans. Those who switch rarely go back. Once you have gotten close to these machines, their crew, their relentless mechanics tinkering, the drivers whose hands you can still shake to the overall support crew. It breaths, it lives and it reminds you of how things must have been a few decades ago, proven you can still keep the pioneering racing spirit and include modern technologies. And in the end, what other race can keep you riveted 2, 12 and even 24 hours in a row?

CANAM Is Back! Yes, you will see Canam races again starting in September. Cars are currently being built and the pre-race is about finding which drivers would be a good fit. I say, bring on the new blood and let them have a try at little downforce, plenty of power and sliding to manage it all.

Speaking of modern technologies, when will we see hybrids and electrics racing? According to various sources, not tomorrow but in the near distance. All teams are looking into hybrid and any KERS derivative. The best example, and so far the most advanced foray would be Lord Drayson’s amazing B10/12 Lola EV racer. I met with Lord Drayson and the only challenge left to resolve is finding competition. You see, Lord Drayson’s Drayson Racing is the ONLY electric racing team out there. More to come on that topic this week. The American Le Mans Series at the Laguna Seca Raceway brings back racing that is open to public and re-ignites endurance fever.