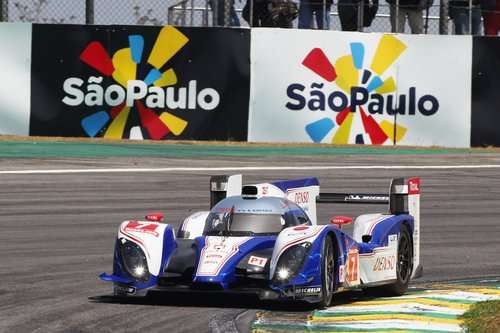 Hybrid race cars are winning in major international races. Last weekend, at the 6 Hours of Sao Paulo, in the FIA World Endurance Championship race series, Toyota achieved a historic win with their new TS030 hybrid race car. Audi came in second, with the hybrid Audi R18 e-tron quattro, and Audi also took the 3rd podium position with a non-hybrid Audi R18 ultra. The Toyota TS030 is only in its third race ever, and it had taken 2nd place in the 6 Hours of Silverstone race in August (which was won by Audi's R18 e-tron quattro).

In June, the Audi R18 e-tron quattro was the first hybrid race car to win at the 24 Hours of Le Mans. Toyota's TS030 was in that race, its first race ever, but disappointingly had an engine failure during hour 10 forcing the TS030 out of the race. In August the two met again, for the TS030's second race ever, at the 6 Hours of Silverstone (FIA WEC). While the Audi R18 e-tron quattro won that race, the Toyota TS030 came in 2nd place, 55 seconds behind, after being in the lead for a large chunk of the race.

This is a strong showing for a race car that is only in its third outing. Out of three races it has taken podium spots in two. This win is historic in two ways. First, it has been a long time since Toyota's last win in an international motorsports event. Second, this was the first time for a supercapacitor hybrid race car to take pole position, and to win, an international motorsports event.

The Toyota TS030 hybrid race car is the result of research & development by Toyota Motorsports since 2006. Toyota's hybrid racing project achieved the first hybrid racer win, at the 2007 Tokachi 24 hours endurance race. The team has developed a supercapacitor based hybrid system, to capture energy with regenerative braking, allowing for significant energy bursts at other times. Since the 2007 win, Toyota says their "pioneering super capacitor technology has been extensively developed, reducing weight and increasing power."

Current electric and hybrid cars have regenerative braking systems that send power into the battery pack. This recaptures energy from braking, energy that would otherwise be lost as heat in the brake pads, using that energy later to power the vehicle. A system that sends recaptured energy into a supercapacitor bank instead is more efficient, and can easily handle currents higher than batteries can. Supercapacitors have long been thought to be the nirvana future for electrified cars, have yet to live up to their potential. Perhaps by testing the technology on the track, Toyota can improve supercapacitor technology so it might appear in regular cars sometime in the future.

This year hybrid race cars, Audi's R18 e-tron quattro and Toyota's TS030, are winning these endurance races. This proves that hybrid drive trains can be fast enough to win major international races. More importantly it gives these companies a testing ground to try out technologies that could end the cars we drive around town.

Tesla Contemplates A New Strategy for China Retail even As Sales Boom
Jay Leno on Elon Musk & EVs: “I Think He Should Get ... Credit"
END_OF_DOCUMENT_TOKEN_TO_BE_REPLACED