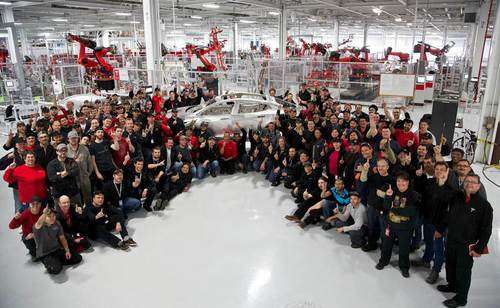 Tesla Motors announced today that Model S deliveries would begin on June 22, 2012, a month earlier than planned, and that the 85 kWh model will give a 320 mile driving range, 20 miles further than previously expected.
Advertisement

According to a post today on the Tesla Motors blog, the Tesla Model S will begin shipping to customers on June 22, 2012, ahead of the previously expected date in July 2012. A special celebration is planned, including a webcast of the first delivery on teslamotors.com. Todays blog post also commences a series on the company's blog titled "Inside Tesla", to show the "cool activities" happening at the Tesla factory in Fremont, as well at the corporate headquarters in Palo Alto.

As part of the promotional effort, Tesla Motors has held a couple "Signature - Four Color" events, to show off the Model S Beta's in the four Signature series colors. They have been held at the Tesla Stores in Santana Row (San Jose) and Fashion Island (Newport Beach). The next event is planned on the East Coast to coincide with the opening of the new Tesla Store at The Westchester (White Plains, NY). The company will bring four Model S Beta's to the grand opening, making it the first appearance of four Beta's on the East Coast.

Last week the company launched a Model S Beta tour across Canada, stopping first in Ottawa and Laval, Quebec. A Signature Red Model S Beta has taken up "temporary residence" in Etobicoke, Ontario and will be moving on to Calgary and Vancouver in June. The actual schedule is: May 23 - May 27 Sherway Gardens Etobicoke, Ontario; June 6 - June 10 Chinook Centre, Calgary, Alberta; and June 13 - June 17 Pacific Centre, Vancouver, B.C.

The blog post also contains a few updates about features in the Tesla Model S.

Regenerative braking is this cool feature of most electric car designs to recover energy from slowing the car down. The Tesla Roadster had this feature, as does the Model S. One aspect of the effect is that when the driver lifts their foot off the accelerator, the car immediately starts slowing down similarly to the engine braking effect on manual transmission cars and motorcycles. What will be new in the Model S is that this effect will be customizable. Some will like a steeper regenerative braking effect (for a more pronounced slowing), and others will like a lighter effect. This will be adjustable in the settings menu in the control panel.

Similarly Model S owners will be able to adjust the steering and suspension, again from the settings menu on the control panel. The steering adjustment controls how much resistance is required to turn the steering wheel. The suspension settings control the ride height. A lower ride height reduces aerodynamic drag, and a higher ride height lets you drive over uneven ground or speed bumps. This can also accommodate carrying a full load of cargo in the front and rear trunks.

A couple weeks ago Tesla Motors revealed that Model S range testing showed the car will achieve a greater than expected range. The company had set a goal, with the 85 kWh Model S battery, to achieve a 300 miles range using the 2-cycle EPA test procedure. That test procedure is a blend of 55% city cycle driving and 45% highway cycle driving. However, the company notes that this is a range estimate because there are many factors determining actual driving range, including the actual each individuals driving habits.

Using the 2-cycle test procedure the Tesla Model S has a driving range of 320 miles, exceeding the 300 mile goal by 20 miles. This was carried out in test conditions of 75 degrees Fahrenheit and varying driving speeds topping out at 60 miles/hr. The EPA has a new 5-cycle test that pushes vehicles even further, including cold or hot weather testing. Under that 5-cycle test the Model S achieved a 265 mile range figure.

This sets a new record for electric vehicle range, in production electric cars. Electric cars have been constructed driven over even longer distances than this. We have heard of an electric car in Germany a few weeks ago which was driven for 500 miles. A really long range electric car simply requires having a really large battery pack (and the money to pay for it). What's different is that Tesla Motors will deliver this much all electric driving range in a production electric car that is being built in a significant volume.

Tesla claims one of their policies is to under-promise and over-deliver. With numbers like these it appears the Model S will continue that tradition.

Anonymous wrote on May 28, 2012 - 12:00pm Permalink
How much will this vehicle cost? If someone "expenses" it over time, what is the cost per mile say over a 10 year period? Will the batteries have to be replaced before then? What will that cost be? If EVs are to ever be successful (battling 100+ years to be considered a viable option), more economical and competitive EV vehicles must be produced. Sure, Tesla's vehicles perform well and have increased range over the Leaf and Ford Focus EV, but they do not meet the needs of 99.99% of the world. Even the Leaf and Focus are cost prohibitive for most consumers. The payback for the extra money invested is either so far out or will never happen, the fate of the EV continues down the same road it has been on for over 100 years, which is sad. There are technologies that are now available that can bridge the gaps and reduce the costs, but any cost savings found are then commercialized. The price of an EV must be only slightly higher than a carbon fueled vehicle or it will never be competitive enough to sway consumers to switch.