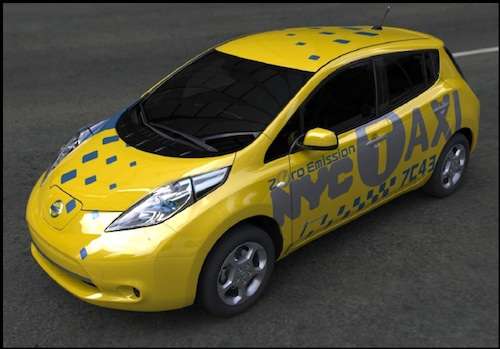 In the first time in over 110 years since electric taxi's were last used in New York, Nissan and NYC are working together to develop the Taxi of the Future starting with a fleet of Nissan LEAF's.
Advertisement

Beginning in the Spring of 2012, New York City plans to deploy six all-electric Nissan LEAF's in the taxi fleet. It's a pilot program leading towards NYC's Taxi of Tomorrow program which is hoped to, eventually, include routine use of zero emissions vehicles in that city's taxi fleet.

The project, a joint venture between Nissan and New York City's Taxi and Limousine Commission (TLC), is a step towards NYC's Taxi of Tomorrow vision begun in 2007. A City working group including taxi drivers, owners and riders, developed requirements for what would be a purpose-designed taxi. These requirements includes things like anti-bacterial seats, more luggage room, easy access without needing to twist or pivot to become seated, economical operation partly due to fuel efficiency, and the capability to be manufactured with an electric drive train. In May 2011, Nissan's NV200 was selected as the winning design and is expected to go into service in late 2013. In the meantime deploying a few LEAF's into Taxi service will help both Nissan and New York City learn about using an electric car in taxi service.

The program opened to applicants a couple months ago, and both independent owner-drivers and taxi fleet operators were free to apply. The participants will be selected in January 2012, and will receive a free lease for up to one year along with a taxi medallion with which to operate the taxi. The participants will be picking up passengers and collecting fares like normal, and are required to send in feedback to Nissan and NYC throughout the program.

Of course operating range will be an issue because the Leaf has a 62-138 mile driving range depending on driving habits. Achieving the 138 mile range would take the cabbie driving at a slower speed than they're typically known for. The TLC's information packet spelled this out very carefully, cautioning participants they'll most likely need to stop mid-shift to recharge, taking either 15 minutes or 3 (or more) hours depending on the charging station being used. NYC has very few charging stations, primarily on Manhattan. Charging stations will be installed at fleet garages, owner-drivers homes, and perhaps at the airports.

The program would seem to work best if fast chargers were available but a quick scan of the stations visible through the ReCargo app shows none, and that existing charging stations are (understandably) primarily located in parking garages. One can imagine taxi stands in a different configuration than is typical today, where there is a line of charging stations letting taxi's grab an opportunity charge while waiting for their next fare. Today's taxi stands aren't configured this way, meaning grabbing a recharge would happen separately from waiting for a fare.

This is not the first time electric taxi's have been used in New York. In 1897 an electric taxi fleet was put into operation by Electric Carriage and Wagon which included some advanced features like quickly exchangeable battery packs allowing cabs to remain on the streets for more hours of the day.

Fossil fuel combustion in gasoline or diesel transportation vehicles make up 27 percent of our national greenhouse gas emissions. This program is a very small step in NYC's ambitious climate change mitigation strategy. NYC has a fleet of 13,000 taxi's, approximately 4500 of which are hybrid vehicles, which just says there's a long way to go to clean up NYC's taxi's.

How green is NYC's new taxi?