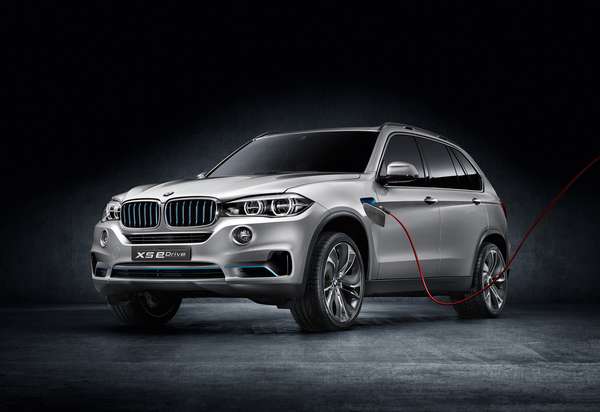 BMW says it is planning to make plug-in hybrid electric versions of every car they build, following the BMW i3 and BMW i8 with a plug-in hybrid version of the newly revamped BMW X5 SUV.
Advertisement

Speaking at the Australian launch of the BMW X5 this week, BMW’s head of production line for large vehicles, Peter Wolf, told motoring.com.au that the BMW's intention is to electrify their entire product line. The company is getting ready to launch sales of the BMW i3 electric city car, and the BMW i8 plug-in hybrid sports car. Next on their list is the BMW X5 eDrive, a Plug-in Hybrid SUV.

Wolf told motoring.com.au, an Australian automotive news website, that "battery packaging issues" were the primary hurdle before BMW would start building plug-in hybrid versions of their entire product line. Today the company has Hybrid versions of several models in their product line, and they "are planning to have a plug-in hybrid [vehicle] in each and every model series."

The BMW X5 eDrive was shown earlier in September at the 2013 Frankfurt International Motor Show (IAA). It combines a turbo-charged four-cylinder combustion engine with a 70 kW/95 hp electric motor. The battery pack provides enough range for 20 miles of all electric driving. It uses the BMW xDrive technology to offer superior driving characteristics via electronically controlled and fully variable distribution of drive between its front and rear wheels. Power generated by either gas engine, electric motor, or both, is intelligently channeled to the rear or front wheels in the precise ratio necessary for good propulsion and handling. BMW says this design will give assured traction and optimised stability in all weather and road conditions, coupled with increased agility through dynamically taken corners.

The electrified drive train enables BMW's engineers to unlock impressive potential for reducing fuel consumption and emissions. Fuel efficiency is said to be very high, perhaps above 60 MPG, while the emissions are the same as the Toyota Prius, or under 90 grams per kilometer.

Availability of the X5 eDrive is still unknown, with Wolf is saying that the vehicle is nearly ready to be launched, just not in 2014.