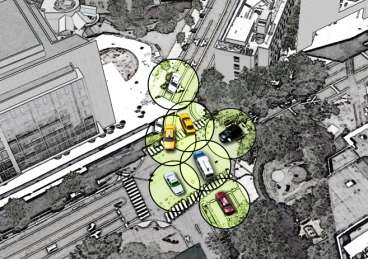 The MIT (Massachusetts Institute of Technology) News Office advised yesterday that researchers there have devised an algorithm that can predict which vehicles are likely to run a red light, potentially making intersections safer. MIT states in its news release, “In 2008, according to the National Highway Traffic Safety Administration, 2.3 million automobile crashes occurred at intersections across the United States, resulting in some 7,000 deaths. More than 700 of those fatalities were due to drivers running red lights.”

Most of us see people running red lights on a daily basis, and something that could tip us off to likely culprits could save real wear and tear on our vehicles and our nerves. MIT further states that, “According to the Insurance Institute for Highway Safety, half of the people killed in such accidents are not the drivers who ran the light, but other drivers, passengers and pedestrians.” Therefore, something that could reduce the number of accidents would benefit us all, not just the scoff laws who persist on speeding through intersections.

The MIT algorithm was designed to pick out the perpetrators using factors including the vehicle’s deceleration and how far it is from the light. Once they had their formula, they tested it at an intersection in Virginia. Fifteen thousand vehicles later, they knew it worked. Detailed findings will appear in the journal IEEE Transactions on Intelligent Transportation Systems, but basically the researchers found their system could correctly identify red-light runners 85 times out of 100, bettering existing algorithms by 15 to 20 percent.

The group says the algorithm is most accurate one to two seconds before a potential collision, which could give an alerted driver time to react, while generating fewer false positives than similar systems. Jonathan How, the Richard Cockburn Maclaurin Professor of Aeronautics and Astronautics at MIT, and one of the paper’s authors, says, “The challenge is, you don’t want to be overly pessimistic. If you’re too pessimistic, you start reporting there’s a problem when there really isn’t, and then very rapidly, the human’s going to push a button that turns this thing off.”

How adds, “If you had some type of heads-up display for the driver, it might be something where the algorithms are analyzing and saying, ‘We’re concerned.’ Even though your light might be green, it may recommend you not go, because there are people behaving badly that you may not be aware of.”

Obviously, vehicles would have to talk to each other to make such systems work. The US Department of Transportation and several car manufacturers are currently working on such vehicle-to-vehicle (V2V) communication. In fact, Ford is already road-testing V2V prototypes.

The researchers are already working on further refinements, including the possibility of adapting the algorithm to air traffic control.