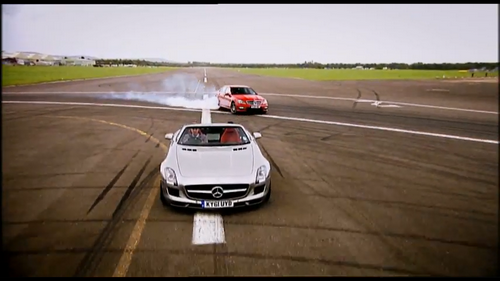 Hey Top Gear fans, are you ready for the next season of the wildly popular car show? Top Gear UK today released the latest trailer for Season 18. As usual, it shows all the latest mayhem, antics, and crazy stunts the three hosts, Jeremy Clarkson, James May, and Richard Hammond will be getting into in Season 18.
Advertisement

The British Broadcasting Corporation TV program is extremely popular. It is one of the most watched TV shows in the world with a global estimated audience of 350 million people every week.

Recently History channel launched an Americanized version of Top Gear with: Tanner Foust, a race car driver; Adam Ferrara, an actor and comedian; and Rutledge Wood, a race analyst. The American version of Top Gear has had mixed reactions from critics and fans of the original British version. (You can read my editorial on it.)

In Season 18 there will be some interesting and fun segments. It seems Richard Hammond will try his hand at racing in NASCAR in a stock car. He won't just race in the car, but from the way the trailer is cut it seems as he will actually be racing in a real race. Typical of Top Gear there will be a supercar challenge which will feature a Lamborghini Aventador, McLaren MP4-12C and a Noble M600. It seems also Yves "Jetman" Rossy will be featured in the series as well, with his incredible homemade and hand-built jetpack. Ray Winstone, the well-known British actor who has appeared in such movie as Indiana Jones and the Kingdom of the Crystal Skull, Beowulf, and The Departed will be making an appearance in a segment. Most likely the hosts have him doing something crazy.

The new season will take also take the hosts to China to test out the offerings of vehicles there from Chinese auto manufactures. There is also going to be an India special which word has it will be quite amazing.

In short, Top Gear Season 18 should be just what fans of the show expect, which is general motoring craziness for 1 hour.

Elon Makes a Cybertruck Statement With an Action, But Quiet in Words
Tesla's Record Month in China: Doubled Registrations in March 2021
END_OF_DOCUMENT_TOKEN_TO_BE_REPLACED