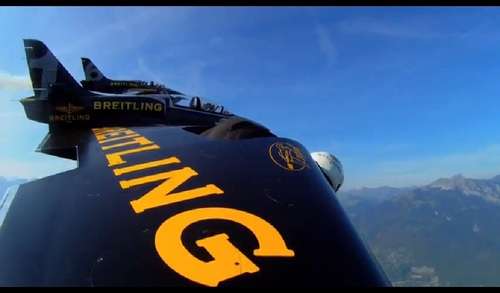 Man flies high in the Sky, with Jets

Have you ever imagined flying? One Swissman, Yves "Jetman" Rossy, has done just that. Flying high above the Swiss Alps, along with the Breitling Jet Team.
Advertisement

The world`s first jet-powered man jumped off a helicopter with his rigid wing equipped with 4 jet engines. He was able to perform amazing acrobatic stunts, by just moving his body alone. He did this with the Breitling Jet Team, the world`s largest professional civilian aerial stunt team.

Yves Rossy was fascinated with flight and planes from a young age. This led him to serve as a military pilot and then a commercial pilot for Swiss International Airlines, flying many different types of planes. He wanted to experience flight in more natural form, not with the enclosure and safety of a cockpit. He started experimenting with different designs for his Jetpack. Over 10 years and 15 prototypes later he finally had a design that was capable of allowing him to truly “fly like a bird” in the sky, for a marvelous 10 minutes. All he has is an altimeter for safety, and a throttle control in his hand to vary his speed. His body controls his movements.

The Breitling Jet Team members display their acrobatic flight skill all across Europe and the Middle East. They have a long list of engagements which include major international airshows and Breitling corporate events. Their aerial display usually last 18-20 minutes and include close formations of flying, opposition, solo routines and synchronized maneuvers. Extremely skilled pilots fly these jets, and everything is mastered and fine-tuned to the smallest details. The team illustrates the Breitling values of performance, precision, aesthetic sophistication and innovation. The team flies L-39C Albatros planes.

The video shows the Breitling Jet Team and Yves "Jetman" Rossy flying together, side-by-side. With spectacular views and footage over the Swiss Alps, it is quite amazing. Yves must feel so free flying at that altitude with jets, going where most people could only dream about. This truly shows his dedication to making his dream of flight a reality, and what people can do when they devote their minds to doing something spectacular.

Auto driver wrote on November 29, 2011 - 3:47pm Permalink
This is amazing. Is this future of who we will move one day? I thought cars will fly one day, but I did not realize how man could fly without a car one day. Very interesting.
Adam Yamada-Hanff wrote on January 6, 2012 - 11:03am Permalink
I wish I had one!