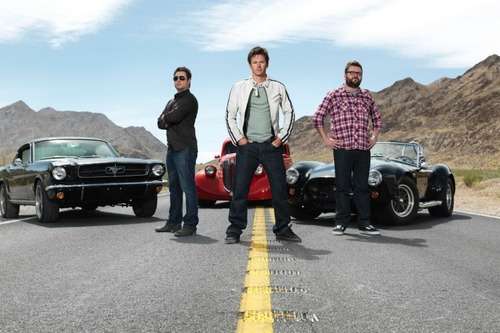 It's time to Cancel Top Gear

It was announced in September of 2011 that Top Gear US, which broadcasts on the History channel, will be extending its second season. For die-hard fans of the original Top Gear on the British Broadcasting Corporation (BBC), this is worse news than if World War 3 was announced.
Advertisement

For those that don't know, Top Gear revolves around three British auto journalists, Jeremy Clarkson, James May, and Richard Hammond. The show is comprised of car reviews, putting stars in a reasonable priced car or on a racetrack, and generally crazy antics in moving vehicles of some sort.

If you were to ask anyone who loves cars about Top Gear, more than likely you will hear, “Top Gear is the greatest show EVER!” I concur!

Fans, like myself, of the one and only good and original Top Gear on the BBC, feel the History channel needs to stop. Please, please CANCEL Top Gear USA! We don't like, we don't want it, and we really, really hate it! We rather have you re-run episodes of the original.

The thing is, for anyone who has brain cells that actually function and that has seen the original, why would you want to watch Top Gear USA? It lacks, the originality and chutzpah of the BBC version with the three awful American hosts, Adam Ferrara, Tanner Foust and Rutledge Wood.

Tanner Foust, is a race car drive that has little in the way of natural camera ability. Most of the time it feels like he is reading from a script, which I am fairly sure he did not write himself. Rutledge Wood, is the fun loving pudgy one out of the bunch. Somehow he just doesn't work either and it also seems like he reads from scripts he did not write.

Adam Ferrara, while I don't want to admit it... is actually good. (I might be biased, since I firmly believe all people named “Adam” are awesome.) He is quick on his feet and is able to carry himself on camera well. No doubt working as a stand-up comic and actor, gives him an edge over the other two hosts. However, he can't carry the show for the other two and the three lack chemistry.

Top Gear USA just feels like a rehashed version of the original, which is not as good. Most of the episodes give the feeling of Deja-Vu of the BBC original.

I hate to say this, but we Americans have a serious problem of taking good British TV shows, and completely ruining them. Anyone ever heard of The Office? I wonder if we will be doing an Americanized version of Downton Abbey?

Even with History channel's success with Top Gear USA's second season, I highly doubt it will continue to grow. Being among the coveted young demographic that History is so keen on, I realized something... most 20-30 year-olds, don't have cable. Those that do most, don't even watch it much.

Young people are used to watching TV and movies over the internet on services like Netflix. On top of that cable subscriptions have declined during this horrendous economy, so how will the History channel grow viewership?

You can watch Top Gear USA episodes via History channels website. However, even with my lighting fast laptop and trying to watch on other fast computers, I can say this with certainty, History channel's online video player doesn't work.

Recently I reported that The Car Show was canceled. The Car Show was an alternative to Top Gear USA, which featured Adam Carolla, Matt Farah, and Dan Neil. Smartly the producers of The Car Show decided to put that show on Hulu, which actually can stream videos over the internet.

In my opinion The Car Show was better than Top Gear USA. The reason was Dan Neil, and rumor has it that he was considered for Top Gear USA. Dan Neil, who won a Pulitzer Prize for writing about cars, would have been a much better choice for host. No doubt about it!

Due to History channel's lack of artistic sensibilities, I have deiced that I must boycott watching the channel. This won't be hard for me to do, since I am young person without cable. :)

Please share your thoughts about Top Gear USA? Do you despise it like I do or think History should make more episodes?