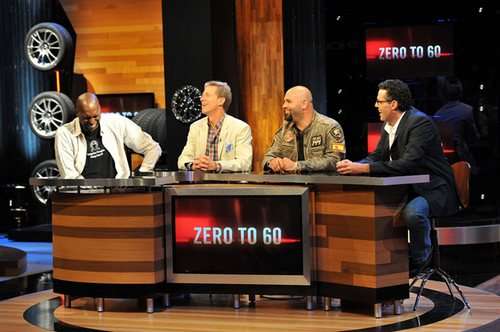 If you are a fan of SPEED channel's “The Car Show”, you might be disappointed to hear that show has not been picked up for a second season. Sadly, this means the show has been canceled.
Advertisement

The Car Show, which debut on July 13th 2011, was somewhat marketed as an alternative to Top Gear US, which has been picked up on the History channel for more seasons it seems. (Argh, I can't watch History channel now!)

The hosts of “The Car Show” were, comedian Adam Carolla; The automotive journalist Dan Neil (who won a Pulitzer Prize for his work), former NBA star John Sally; and host and producer of the car website The Smoking Tire, Matt Farah.

The internet is abuzz with this information and it seems the show was not successful for many reasons. Cast members seemed to not be able to work well with SPEED. “Great news everybody! The Car Show didn’t get picked up for a second season. That means I can move forward with the TV show I really want to do, about green energy, electric cars and socially appropriate transportation solutions. It’s call ‘Titties.’ Ratings, you know” said Dan Neil, who always makes witty and funny comments.

The show did not seem to work for a few reasons. Adam Carolla probably was not the best option for the host. Matt Farah and Dan Neil would have filled that role better. Although he is a funny guy (he is a comedian) it just seemed like he could not carry a cohesive show unless it had “Man” in the title.

John Salley on the show? Never quite made sense, and him being dropped from the show mid-season only confirms that SPEED channel's executives had the same feelings. At least he's much better at playing basketball than most of us!

Although “The Car Show” had issues, in my opinion the show was much better than “Top Gear US.” (If you must know, it was hard for me not to vomit when watching some of the first season.) It never felt like the hosts were reading from cue cards. They felt natural and not forced. On Top Gear US, sometimes it seems as if Tanner Foust doesn't know what the hell he is doing. He should have stayed on the racetrack! This includes Rutledge Wood, while fun loving, he just can't seem to grasp Top Gear.

As well as segments and stunts “he Car Show did were not directly copies of the original BBC Top Gear, like Top Gear US was doing, and still is doing. They at least made an attempt to do some original stuff. Such as competing in the LeMons race, which was I thought was a funny segment.

More than anything “The Car Show” had one very good trump card over “Top Gear US,” Dan Neil. Many people felt he should have been on Top Gear US, and with The Car Show he clearly showed that. He's got a great sense of humor and could always bring in his great, funny, witty, and smart insights to the show. None of the other hosts of either of the automotive focused shows have his ability to convey in words what cars mean to us or why we love or hate them.

The Car Show...RIP! We will miss you as an alternative to that garbage on the History Channel.

Adam Yamada-Hanff, from a young age, has always liked anything with wheels. Throughout his life he has had a special passion for cars and shows that in his writing. In addition to writing for TorqueNews he has his own blog (adamsautoadvice.com/). Please contact Adam– [email protected] – for comments, questions, or suggestions for topics. You can also follow him on Twitter @AdamsAutoAdvice

Elon Makes a Cybertruck Statement With an Action, But Quiet in Words
Tesla's Record Month in China: Doubled Registrations in March 2021
END_OF_DOCUMENT_TOKEN_TO_BE_REPLACED