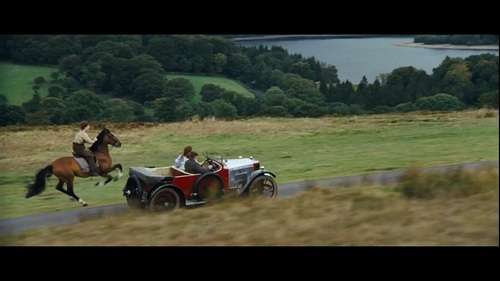 In the new movie War Horse, backed by Hollywood legend Steven Spielberg, there are not only stunning sequences of horses, countryside, battles, but horsepower too. It features two exquisite vehicles of the period, a Vauxhall C-Type and Vauxhall D-Type.
Advertisement

The feature film has a rather stunning sequence with a 1911 Vauxhall C-Type “Prince Henry” in which the War Horse races against C-Type Prince Henry across Dartmoor, in the UK. The movie also features a 1918 Vauxhall D Type Army Staff Car as well.

The 1911 Vauxhall C-Type is widely acknowledged as Britain’s very first sports car. The nickname “Price Henry” refers to Prince Henry of Prussia, who the car was named after. He sponsored early reliability trials during the early days of motoring. The C-Type was on sale from 1911 to 1914. The chassis price, which excluded body, was £485 ($743 American dollars) back in 1911. If you take into account inflation over 100 years, that is equivalent to $17,000 in today's money. Prince Henry Vauxhalls won many trials and hill climbs including the Swedish Winter Trial in 1912.

The 1918 Vauxhall D-Type Army Staff Car is a development of the ‘Prince Henry’ for World War 1. Vauxhall built around 2,000 Vauxhall D-Types for the British War Office, which cost £500 ($766) each. Adjusted for inflation a D-Type would have cost around $17,700 in today's dollars.

These Army Staff Cars saw war-time service in many countries, including countries like Egypt and Salonika. A D-type carried General Allenby into Jerusalem, another was the first car to cross the Rhine into Germany after the 1918 Armistice.

“Steven Spielberg loved the C-Type Prince Henry but due to its non-conventional controls, an expert was on hand to drive on set to master the centre-mounted throttle and outside gear changes.  Mechanics were also around 24/7 to ensure the car was always operational so that valuable filming time was not lost.  It’s great that these two cars from Vauxhall’s own museum, representing the company’s rich automotive heritage, are starring alongside such notable actors.” said Denis Chick, Vauxhall Motors’ Director of Communications said.

Vauxhall Motors has a history that spans over 109 years. The auto company has manufactured vehicles in Britain without a break since 1903. During the First World War, the plant in Luton continued to contribute to the war effort by producing the D-Type Army Staff Cars. At this time all cars, including the D-Type, were hand built. Throughout the Second World War Vauxhall Motors designed and built the Churchill tank, Queen Mary Aircraft Trailers, and thousands of jerry cans and steel helmets to help the war effort.

The movie “War Horse” is showing in theaters now. I would definitely go see this movie if you are interested in antique cars and horses, or if you want to have quite an adventure for 2 hours.