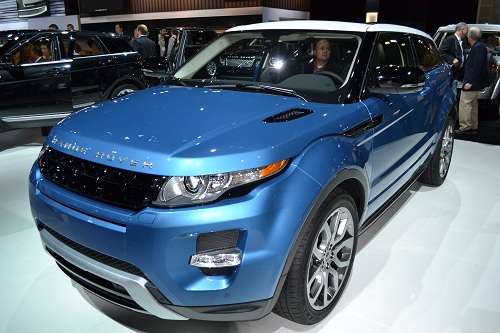 The 2012 Range Rover Evoque is the smallest, lightest, most fuel efficient Range Rover ever produced. It maintains the quality of Ranger Rover and Land Rover vehicles, providing the highest levels of craftsmanship, luxury, and performance. In true Land Rover and Range Rover fashion it has off-road capability matched be few.

The Range Rover Evoque can be ordered in a coupe or five-door version. Prices start at just under $55,000 for the coupe and $44,000 for the five-door. They are identical in overall length and width, but the five-door has a slightly higher roofline. Each Evoque coming to the US will have AWD (All-Wheel-Drive) and come equipped with a 240-horsepower turbocharged, four-cylinder engine mated to a six-speed automatic transmission.

“We know our customers in the United States will share our excitement over this award for the newest addition to the Land Rover family.” said Andy Goss, President, Jaguar/Land Rover North America.

The new 2012 Range Rover Evoque has won numerous awards. This includes Motor Trend's coveted 2012 Sport/Utility of the Year award. “Its dramatic styling, and classy interior will make this vehicle one of the hot picks for urban trend setters around the globe.” said Angus MacKenzie, Editor-in-Chief of Motor Trend magazine about the Evoque.

Another accolade that the 2012 Evoque should feel proud it won is Automobile Magazine's All-Star Award. This recognizes 10 vehicles every year by by the editorial staff of Automobile.

Other awards and accolades include Scottish Car of the Year, which is voted on by the Association of Scottish Motoring Writers (SMW). It also won Best Compact SUV by SMW and it got more votes than any previous winners of the award. Stuff Magazine's Car of the Year is another award on the Evoque list. "For combining the off-road capabilities of a Range Rover and leading technology with the desirability of a Blade Runner space car, the Range Rover Evoque just had to win it for us." said Stuff Magazine Editor, Will Findlater.

Most likely the 2012 Range Rover Evoque will continue to win accolades from the automotive press as well as buyers.