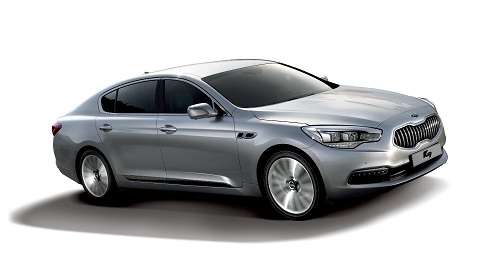 Kia's all-new luxury sedan, the Kia K9, has recently gone on sale in Korea. Here is what Kia K9 means for the Korean automaker.
Advertisement

From the looks on the outside and the inside the Kia K9 seems to signal that Kia is ready to take on the big players in the luxury automotive industry, such as Mercedes-Benz, BMW, and Audi. You might be scratching your head, but this was even stated by Kia.

“K9 is a clear signal of our intention and determination to compete head-to-head with the European luxury brands. And for Kia, our customers, and for me – this car is like a dream come true,” said Kia’s Chief Design Officer, Peter Schreyer. Kia is not playing just building Rios anymore.

The striking new rear-wheel drive sedan will be launched in a several other markets toward the end of 2012. The assumption is that North America will be among those markets.

The K9 is being offered in Korea with two different gas engines a 3.3-liter V6 with 296-horsepower and a 3.8-liter V6 with 329-horsepower. Each is attached to Kia's all-new eight-speed automatic transmission, which drives the rear wheels.

Every K9 will be equipped with Kia’s all-new eight-speed advanced automatic transmission. The wide spread of gear ratios make acceleration brisk and while the shift-by-wire (SBW) technology with a joystick control delivers fast, smooth gear changes. (It will also sort of feel like a manual...hopefully.)

Kia stated that in other markets, the K9 will initially be available with an upgraded 286-horsepower Lambda V6 3.8-liter MPI engine, and a 329-horsepower 3.8-liter GDI engine joining the global engine line-up next year.

“K9 is all about elegant simplicity, balanced proportions and simple surfaces,” says Kia’s Chief Design Officer, Peter Schreyer. “The class-leading long wheelbase, the prestige distance, large wheels, sharply upright short overhangs and a long sweeping shoulder line all work together in a harmony to give K9 a sporty, athletic proportion and a confident stance quintessential to a premium large rear-wheel drive vehicle.”