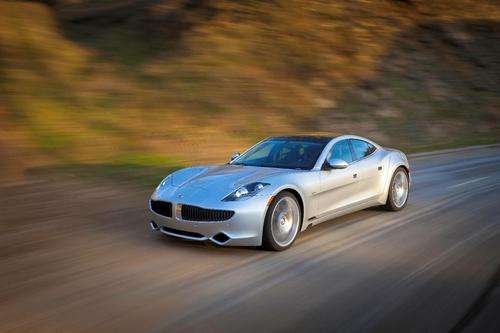 The Fisker Karma sedan has won Automobile magazine’s 2012 ‘Design of the Year' award. The Fisker Karma won for its “voluptuous overall body form," as well as the fact that it is a technology leader in the automotive industry, since it is the world’s first true electric vehicle with extended range.
Advertisement

“The Karma is a beautiful and highly dramatic automobile, unlike anything else on the road today and yet very much like dozens of the most beloved sports cars of the past.” writes Automobile's Design Editor Robert Cumberford. “This is an impressive car, outstanding on the road, and very much a worthy ‘Design of the Year’.”

Cumberford further added, “Details like the solar energy receptors in the glass roof, the use of reclaimed wood for interior trim, the lozenge-shaped openings low on the outer corners of the bumpers, and the outlets on the sills ahead of the front doors are all visually interesting but not obtrusively so.”

The only complaint from Automobile was that the interior does not match the exterior beauty. The editors commented, “the Karma's interior [is] slightly homemade and less impressive than its voluptuous overall body form,” Indicating the interior could use some upgrading and final touches. Of course the model Automobile editors had access to was most likely a prototype.

The Karma premium luxury sedan is the vision of designer Henrik Fisker. He is responsible for creating stunning vehicle designs such as the BMW Z8 and beautiful Aston Martin DB9.

“As a design-oriented company we are incredibly proud to win Automobile magazine’s ‘Design of the Year’ award,” said Henrik Fisker, who is also CEO of Fisker Automotive. “It proves our belief that we can produce environmentally responsible cars without sacrificing the emotional things that make us fall in love with cars in the first place.”

In receiving this award, the Fisker Karma joins a small and exclusive list of previous winners, which includes the 1995 Ferrari 456GT, and the 2005 BMW 6-Series. One of Fisker's designs has also won this prestigious award, for the 2007 Aston Martin V8 Vantage. An important note is the Fisker Karma is only the fifth American car to have won in the award’s 23-year history.

The Fisker Karma is now arriving in showrooms throughout the U.S. and Europe. Designed and engineered at the company’s Southern California headquarters, it will be built in a facility in Delaware.