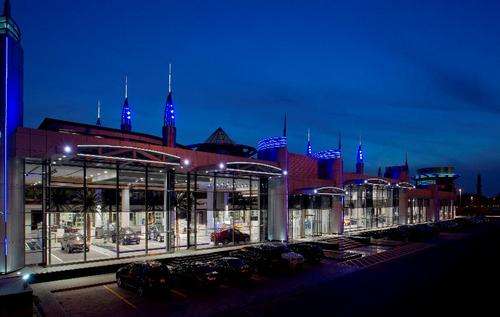 Largest BMW showroom in the world opens in Abu Dhabi

Many important people were at the unveiling of the new showroom. This includes Ian Robertson, member of the Board of Management of BMW, who is responsible for Sales and Marketing, His Highness Sheikh Hazza bin Zayed Al Nahyan, National Security Advisor and Vice-Chairman of the Abu Dhabi Executive Council, and Arno Husselmann, General Manager of Abu Dhabi Motors.

A private and exclusive event was held on Tuesday evening attended by around 1,000 guests. The invited guests also included Graeme Grieve, Vice-President for Importer Markets of BMW, Adrian Van Hooydonk, Director of BMW Group Design, and a large number of VIPs and celebrities from the region, including fashion designer Walid Atallah.

“The Middle East is an important region for the BMW Group. We sold more vehicles here in 2011 than ever before. There is tremendous future growth potential in many countries in this region and in the United Arab Emirates in particular.” said Robertson.

The Middle East is an increasingly important market for the BMW Group. A total of 18,657 BMW and Mini brand vehicles were sold last year in the region which was an increase of more than 9 percent compared to last year. The United Arab Emirates (UAE) accounted for more than 47 percent of sales, with Dubai and Abu Dhabi being the largest markets.

The expansive facility in Abu Dhabi located in Umm Al Nar has separate showrooms and sales areas for BMW, Mini and Rolls-Royce. BMW motorcycles has a separate section as well. The facility will employ more than 450 people. The new showroom will display 70 automobiles and 10 motorcycles on permanent display. This will be complemented by an extensive range of newer pre-owned vehicles and a state-of-the-art service area equipped with the latest technology. The repair center will also be quite massive, as it can perform maintenance on up to 120 vehicles simultaneously.

The facility will also have an extensive shopping and boutique area, which will sell a wide selection of BMW and Mini fashion items and other merchandise to customers. It will also sell original parts and accessories. Other features include a café, a Formula One racing simulator and a children’s play area. To top it all off, there is private cinema that can host exclusive new-vehicle presentations. What else could you ask for from a dealership?