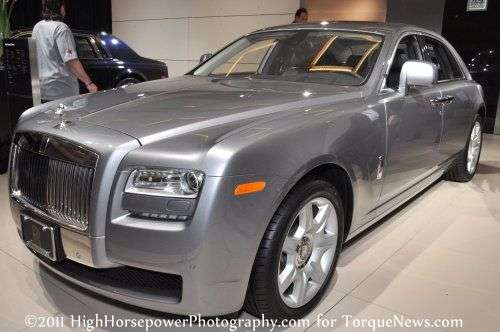 The ultra-luxury Rolls-Royce brand is talking about bringing to the market an all new hybrid, or soley battery powered vehicle. Although consumers have not been asking for electric vehicles from Rolls-Royce, the brand believes EVs will keep the brand competitive in the market today.
Advertisement

With most other brands going eco-friendly, Torsten Mueller-Oetvoes, the unit's chief executive stated that bringing hybrids to the market is important in order for Rolls-Royce to remain on top in the long run. It has been reported by the Wall Street Journal that Rolls-Royce is on track for another record year of sales and that it is expanding further.

As far as expanding, Rolls-Royce will be adding new dealerships in the next few years. The brand currently already has a network of 85 outlets, but will soon be looking into opening a second dealership in Russia and possibly another two dealerships in India. This will be in addition to the two that already exist. Mueller-Oetvoes said he "could well imagine opening new German stores in Berlin and Hamburg and is also considering the South American market.”

However, despite a great sales year for 2010 (2011 figures have not come out yet) Rolls-Royce still feels it needs to up its ante. Although it was said that customer feedback about electric cars has been “ambivalent,” and consumers are uncertain about Rolls-Royce electric cars, the brand believes it still has to come up with alternative drivetrain offerings in order to stay aggressive in the auto industry. It believes that the electric car is the logical choice.

Mueller-Oetvoes made this statement at the 2011 Frankfurt Motor show, according to the Wall Stree Journal: "I think we have to deal with the (alternative drivetrain) issue, even though it’s not driven by demand.” Mueller-Oetvoes continued by sharing that “a lot of customers are fascinated by the brand's huge 12-cylinder engines and don't want anything other than these big combustion engines in their cars.”

After seeing the electric 102EX test model earlier this year, customers still remained unsure about a Rolls-Royce electric vehicle. Mueller-Oetvoes said that no decision has been made yet on whether Rolls-Royce will manufacture a hybrid vehicle or a purely battery-powered vehicle.

hid xenon conve... wrote on November 3, 2011 - 7:25am Permalink
I found this article is really useful for me in my job. Thanks for sharing this useful information.