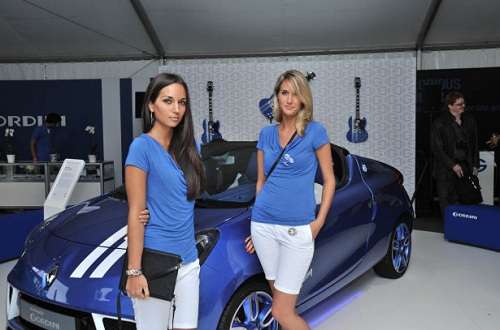 Renault and Gibson are now teaming up together to create a unique combination of a special edition Gibson SG 1961 guitar and a unique Renault Wind Gordini by Gibson show car.
Advertisement

What could be more exciting than an amazingly sporty vehicle, like a Gordni blue Renault Wind Roadster driving down the road with some amazing rock music playing to complete the mood! Can you imagine it? Well, just imagine sitting inside on seats with guitar strings actually woven into the seats.

Both the Gibson guitar and the Renault vehicle will be a Gordni blue with white stripes and a Gordini nameplate to match each other. The car will also feature the Gibson logos and guitar strings that will be woven into the leather seats. The knobs on the stereo system will be Gibson guitar knobs.

Renault knows how sexy their cars are and how sexy rock music is -- and with that said, they will be teaming up with the prestigious Gibson for a special edition guitar and Wind Roadster to celebrate both their product and rock music. How exotic!

Renault is a French automaker that currently produces cars and vans. Renault has been said to have an alliance with Nissan, which makes it the 3rd largest automaker! Nissan and Renault are investing 5.16 billion dollars into eight electric vehicles over the next 3-4 years, making the automakers the leaders in electric car development.

Now Renault is teaming up with the Gibson Guitar Corporation, out of Nashville, Tennessee. Gibson is known mostly for its manufacturing of guitars, especially the electric, solid-body guitar model, the Les Paul. Gibson also makes other instruments as well, which sell under a variety of different brand names including Baldwin, Epiphone, Kalamazoo, Kramer, Maestro, Slingerland, Steinberger, Tobias, Valley Arts and Wurlitzer. Gibson is so popular that a variety of famous musicians and artists have played its guitars and other instruments.

In a press release sent out regarding this fun collaboration between Renault and Gibson, Julia Macfarlane, colours and materials designer at Renault had this to say: "We had tremendous fun designing the Wind-based 'Gordini by Gibson' show car and carrying Gordini's visual identity over to the Gibson SG '61 guitar. I hope that we succeed in conveying the passion that fired us throughout the project and that visitors to the Rock en Seine festival will like the result."

Tony wrote on September 5, 2011 - 11:19am Permalink
What a strange but exciting collaboration!? It's like Meatloaf in a band with Justin Bieber!;) Looking forward to how this thing will come out!