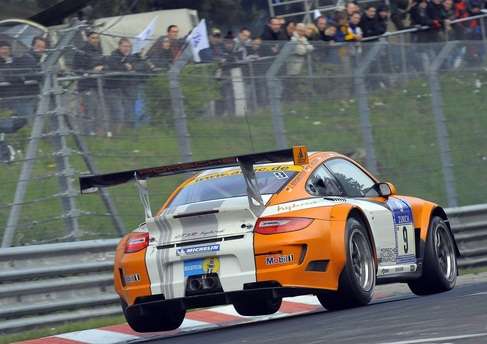 Madison Snow, at just 15-years-old, drove his Porsche 911 GT3 Cup over the finish line to victory, and won the 2011 International Motor Sports Association GT3 Cup Challenge at the series’ stop at Laguna Seca this year. Snow doesn’t even have a driver’s license yet; however, he does have more talent than many race car drivers double his age.
Advertisement

Snow is a champion race car driver who won one of the most intense race series in the world; IMSA GT3 series. But how? The teen-ager is not even allowed to legally drive.

The ALMS is the American Le Mans Series presented by Tequila Patrón is a sports car racing series based in the United States and Canada. It consists of a series of endurance and sprint races, and was created in the spirit of the 24 Hours of Le Mans. Teams compete in one of five classes: LMP1, LMP2 and LMPC Le Mans Prototypes, and GT(2/E) and GTC Grand Touring cars. Race lengths vary from 1 hour, 40 minutes to 12 hours. This is the race for which Melanie Snow is most known.

The IMSA is an American sports car auto series organized by International Motor Sports Association. Races took place primarily in the United States and occasionally in Canada. Despite various names, the GT series was known commonly as the IMSA series, as it had been the organization's dominant series.

Snow is now following in his mother’s footsteps and is already winning championships at such a young age. He has a following of fans that not only marvel at his age, but also at his talent.

It wasn’t long before Madison drove his Porsche 911 GT3 Cup over the finish line to grab the title of champion. Even before the end of the season, he was already crowed a champion thanks to a full 47-point lead over the series’ second place driver.

Snow didn’t just win either; he won with a landslide over the second place driver. He’s going far. Snow loves his job as well, and while at the race at Road Atlanta, he said that he wanted to “just have fun out there.” Madison Snow is a prodigy well worth watching if you are a race car enthusiast.