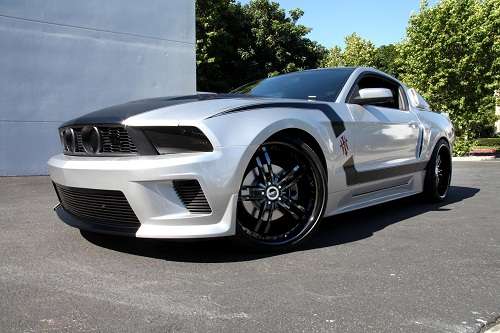 The "hawkized" Ford Mustang commissioned by skateboarding megastar Tony Hawk is on an auction block for the second time in seven months, and both auction sales benefit charities.
Advertisement

Bidding for the tricked out Mustang is Saturday evening at the Barrett-Jackson auction in Costa Mesa, California.

“I’m proud to have created this custom Mustang with the help of DUB and Galpin Ford,” Hawk said. “It’s truly a one-of-a-kind ride, and the proceeds from this sale will benefit two great causes that support youth.”

Hawk commissioned the famed Galpin Auto Sports customizing shop in Southern California to make the 2011 Mustang into a one-of-a-kind street rod with the intent of auctioning it to benefit his Tony Hawk Foundation, which supports and empowers youth through events, grants, recreational programs and technical assistance.

He put the Mustang on auction last November and Wing Lam, the co-founder of the Wahoo Fish Taco chain, snapped it up with the intent of turning it over again to benefit one of his favorite charities, the Center of Living Peace in Orange County, California. Never heard of it? Well, the Dalai Lama visited the center in May.

When a friend of Lam’s told him about the Barrett-Jackson auction in Orange County, Lam jumped at the opportunity. What better time and place, he reasoned, to benefit the center financially and educate America’s automotive enthusiasts about the center’s work both at the auction and watching it live on Speed Channel.

The Hawk Mustang is one of eight vehicles that will benefit nine charitable organizations. Bidders are certain to be impressed with this “Hawkish” Mustang.

Galpin Auto Sports, which customizes cars for the Pimp My Ride television show, started working on the Hawk project from under the hood. They tuned the 5.0-liter V8 to produce a neck snapping 425 horsepower that sings an assertive exhaust note through a Flowmaster exhaust system.

Seating is done in high-quality Katzkin leather and a cutting edge JP Audio system will indeed rock you. The body work oozes aggression. Galpin fitted the car with a Street Scene Body Kit with upper and lower side scoops, custom grille, and tinted lights. DUB contributed a set of TIS three-piece wheels fitted with Pirelli tires. For even more attitude, the low ride height is accomplished by Ford Racing lowering springs.

The Mustang wears a customized paint scheme that incorporates a “hawkized” logo on the hood and a Tony Hawk monogram emblazed on the side, which is expected to entice auction participants and scare the daylights out of Camry owners.

Lam took possession of the Tony Hawk Mustang in January. The only time he drove it was when he steered it the 35 miles to its storage facility. The trip was like no other.

“I got so many high-fives and thumbs-up driving on the 405 freeway,” he said. “It turned a lot of heads.”

This is not the ride for anyone who wants to be incognito.