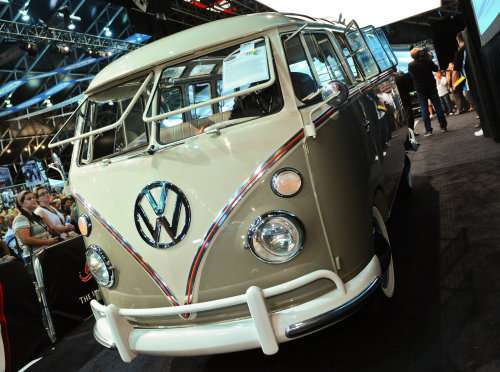 Astonishing the throngs crowded into the auction tent, an immaculate 23-window Volkswagen microbus sold for more money than any of the muscle and classic cars at the Barrett-Jackson auction in Orange County California over the weekend.
Advertisement

Competing bidders steamrolled the bids for the 1963 split-window, deluxe Samba transporter van to $217,800, including bidder fees, to put on record the highest price paid for a VW bus at auction.

Volkswagen’s microbus line has been strong among collectors and investors as they look beyond the mainstream mega-engined factory hot rods, sports cars, foreign exotics and the staple of traditional pre-war and post-war classics and other proven collectables from much of last 100-plus years of automobile production.

The Samba’s consigner contends the bus is “one of the most desirable vehicles in the world,” and this one comes with complete documentation from the VW factory in Germany to prove its authenticity.
The bus is museum quality, benefiting from a high-end, top-to-bottom restoration that took seven years to finish. Every part in the bus was rebuilt and detailed. All the latches, handles, ashtrays and luggage rails are original and restored perfectly. NOS parts were used to rebuild the clock and speedometer. Correct decals decorate the 1500 cc engine mated to a 4-speed transmission.
The Samba, featuring a rare full-length sunroof, wears the original rare exterior color scheme, Mouse Grey and Pearl White, with Balsamic Grey interior capped by a German mohair headliner.
The bus recently won the best bus award at the largest VW show in the U.S., The VW Classic.
The VW micro bus, Volkswagen’s Type 2, standing for the second model the company produced, was built in several configurations and was popularized in the counter culture hippy generation of the 1960s, an image it still holds today.