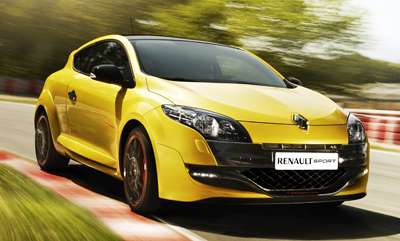 The Renault Mégane RS Trophy will produce 265hp from its 2.0L turbo 4cyl and a very limited run of only 500 units.
Advertisement

The Renault Mégane RS, the high-performance version of Renault's popular hatchback in Europe, is getting an even hotter version called the Trophy.

The Renault Mégane RS Trophy will have a very limited run of only 500 examples, and it will be powered by a 2.0L turbocharged 4cyl making 265hp and 265 ft-lbs of torque, up 15 hp and 15 ft-lbs from the regular Mégane RS.

The Renault Mégane RS Trophy gets its extra horsepower from turning up the turbo boost to an astounding 36 psi, as well as a limited-slip differential and suspension setup from the Mégane RS Cup Edition, plus bigger 19" wheels and grippier Bridgestone RE050A tires.

The Renault Mégane RS Trophy is expected to set a 0-60 time of under 6 seconds, and the top speed is rumored to approach 160mph.

Differentiating the Trophy from lesser Méganes are a black roof panel, special Trophy badging, a different rear fascia with a more aggressive lip spoiler, and of course the wheels, which also have a red accent around the outer circumference of the rim.

The Renault Mégane RS Trophy also gets a set of Recaro seats, and retains the RS's dashboard data display, which records various performance statistics as well as mechanical parameters of the car, like turbo boost and oil temperature, during a track session.

The Trophy will make its first public appearance at the Renault Sport Enthusiasts' Track day at the famous Nürburgring race track in Germany on June 17, and then can be ordered from Renault dealerships in all major European countries on June 20, with prices starting at €35,500, or a whopping $51,000 by today's exchange rates.