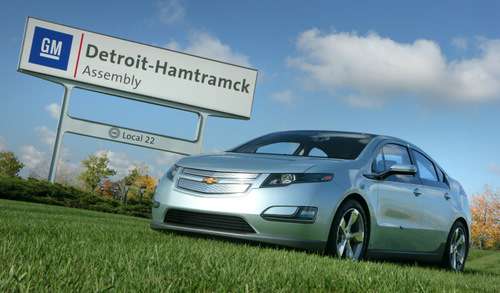 General Motors will not add a second shift of assembly line workers to the Hamtramck plant where the Chevrolet Volt is manufactured until the second half of 2012, later than the original promise of early 2012 made in May.
Advertisement

General Motors will not add a second shift at the Hamtramck plant in Detroit, Michigan that builds the Chevrolet Volt until the second half of 2012, later than originally promised in May. In lieu of adding an extra shift, GM retooled the plant this summer and added a small sum of assembly line workers, which they said will allow them to double production without the addition of a second shift.

Chevrolet said at the same time that they would be able to up production to 60,000 Volts and the European-market Ampera at the Hamtramck plant in 2012, a significant increase from the original 45,000-a-year prediction. That will be with the addition of only 300 workers at the beginning of 2012, who will stay working on a single 10-hour shift 4 days a week. GM spokesman Chris Lee said "This approach is just a more efficient way to make the same number of vehicles - it's good for our business and good for our customers."

Chevrolet is pushing back plans of adding a second shift at the Hamtramck plant until production of the next-generation 2013 Malibu begins. UAW Local 22 president George McGregor said "The sooner the better, but I guess demand will dictate when that happens. Hopefully we'll get a third shift someday, too."

The Hamtramck plant was idle for six weeks during the summer as some body shop functions became automated, such as door subassembly, and approximately six miles worth of conveyor belts were removed. The plant had produced 4.249 Volts by the end of August, and with those increased-efficiency measures put in place, GM said 16,000 Volts will be built by the end of the year, with 10,000 slated for US sales, 2,500 for dealer demos, and the rest for export to Europe and China.

Chevrolet began selling the Volt in December, and 3,895 have been sold from January through September.