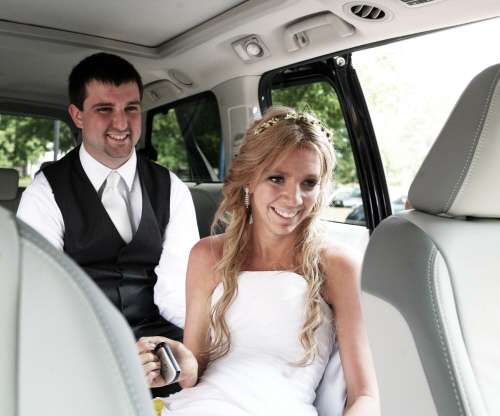 Toyota, Braun give gift of mobility to paralyzed newlywed

The world can be a selfish and unforgiving place. This is a hard truth, especially in an America that can be so cold it's easy to believe nobody cares. Every once in a while, there is an exception to the rule. Such a bright spot portends hope and inspiration that not all is lost for the rest of us. A blushing bride's road from tragedy to triumph, with help from friends like Toyota and The Braun Corp., is proof of that.
Advertisement

Rachelle Friedman, by most accounts, had everything going for her. She fell in love with her best friend Chris Chapman and was ready to be a bona fide beautiful bride. They were in love and had a lot in common. They even worked in the same profession. Everything was gangbusters about a year ago until a bridesmaid friend, who was just horsing around, shoved her into a swimming pool.

She got hurt during that May 23 bachelorette party in Virginia Beach, Va. Badly hurt. She banged her head so hard on the cement that she stopped moving, instantly, and emerged from the water paralyzed from a spinal injury, turning a festive occasion into a calamity.

The wedding was, initially, postponed, to deal with the injury. But her man Chris, 28, stood by her
-- was there ever a doubt? -- and last week a wheelchair-bound Rachelle, 25, married him in front of about a hundred friends in a barn at the Fearrington House in Pittsboro, N.C.

Afterwards, the two upbeat school teachers celebrated their newlywed status with a quiet honeymoon in Fiji and set up house in Knightdale, N.C.

The choice to be loyal was an easy one. "It was not, 'What am I going to do?' " Chris told The Associated Press in an interview last week. "It was, 'What are we going to do?' "

She was equally committed to her man. "I can't compare our relationship to anyone else," Rachelle said in an interview with Deadspin.com. "I am super lucky to find that perfect love I wish everyone had."

Even her mother sees that they were meant to be together. "It just feels like a love story to people," Rachelle's mom Carol told CNN. "They are really great together (pictured, inside the van)."

The other thing that makes this tale one for the ages is the abundance of corporate generosity. At their wedding reception in Raleigh, Braun and Toyota presented the happy couple with some special wheels. The companies, touched by Rachelle's plight, showed up unannounced with a surprise: a free, wheelchair-accessible 2011 Sienna as a wedding gift.

At a time when corporations are more dog-eat-dog than empathetic, Toyota and Braun proved with their generosity to this couple that companies can have a heart. The words are a little stiff, maybe even forced, but the sincerity is genuine from the Japanese carmaker.

"We are honored to share in this joyous occasion," Scott Heyer, Toyota corporate fleet manager, told Rachelle and her husband Chris in delivering the gift of transportation.

"We hope this special gift will enrich your new life together and enhance your health and happiness today and in the future. Congratulations!"

Rachelle's new Sienna is equipped with a special BraunAbility Rampvan XT conversion, to help her get around easier. Mobility dealer Van Products Inc. and Braun, the world’s largest maker of wheelchair-accessible vans and wheelchair lifts, had loaned Rachelle and Chris a BraunAbility Sienna Rampvan as they continued to plan their wedding last year.

Braun wanted to step up because “Rachelle’s resolve and strength are truly inspirational,” said Nick Gutwein, president of Braun.

“We were so moved by her story that we wanted to help her not only while she planned for her wedding, but also as she moves forward in her married life.”

Rachelle had been using a Sienna for wedding and therapy appointments and travel between rugby practices and tournaments. Rachelle's mother had been carrying her in and out of her truck.

Rachelle said the Sienna has had a true impact on her life.

“The van’s made all the difference in the world,” she said. “Not only has it saved my mom’s back (but also) it’s just made it so much easier to get out and do things. I’ve missed this level of comfort, convenience and independence. Next up … learning to drive on my own!”

Patrick Rall wrote on July 23, 2011 - 8:18pm Permalink
After they let their vehicles kill all of those people...its sweet to see toyota doing nice things for someone.