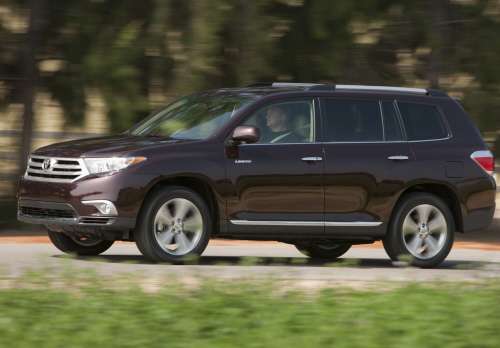 Plus, the 2012 Toyota Highlander is assembled in Indiana, and that bodes well for buyers and the seller in this decidedly Buy American climate.

Options on the 2012 Highlander (pictured) that was introduced today by Toyota include a voice-activated touchscreen navigation system with an 8-inch screen as well as JBL audio systems, leather-trimmed seats with front-seat heaters and a power tilt / slide moonroof. Another option on the base 2012 Highlander is a power liftgate that can be opened and shut with a fob or driver-side control. It is standard equipment on the SE and Limited. There are separate optional tow packages for the 4- (3,500-pound towing capacity) and 6-cylinder (5,000-pound towing capacity) engines.

This second-generation Toyota Highlander, which seats seven, is manufactured in Princeton, Ind., and delivers class-leading fuel economy of 25 to 28 mpg, depending on the model. It builds on the good qualities inherent to the first-generation Highlander, a versatile midsize crossover that was comfortable, stingy on fuel and a dependable performer, too.

A 270-horsepower 3.5-liter V6 is standard on the Limited. It's an option on the two lower grades.

The base Highlander and the SE have a 2.7-liter 4-cylinder engine that produces 187 horsepower with 186 lb.-ft. of peak torque, with an EPA-estimated 25 mpg highway. The engine is mated to a 6-speed electronically controlled automatic transmission.

The 3.5-liter V6 is standard on the Limited and an option on the other grades. It produces 270 horsepower with 248 lb.-ft. of torque. A 5-speed electronically controlled automatic transmission offers what Toyota calls "selectable manual sequential shifting."

Every 2012 Toyota Highlander has a standard 50 / 50 split third-row seat and rear climate control so back-seat passengers are treated with importance instead of as an afterthought.The Highlander base grade has 6-spoke 17-inch alloy wheels, color-keyed power remote outside mirrors and a silver-painted front grille. The Limited adds chrome door handles and roof rails, puddle lamps and a rear spoiler, as well as 19-inch alloy wheels and chrome roof rails.

The Highlander is equipped with the Star Safety System. This includes the following fare as standard equipment: Vehicle Stability Control, Traction Control, Electric Power Steering and the anti-lock brake system with Electronic Brake-force Distribution and Brake Assist. Standard on gas-powered Highlanders is Downhill Assist Control, which maintains handling and steering control and a constant speed by reducing wheel lock under braking, even at slow speeds on slippery descents, Toyota says.

The Hill-Start Assist Control feature helps prevent the 2012 Highlander from rolling backward from a stop by applying braking pressure for 2 seconds. A direct tire pressure monitoring system alerts drivers if pressure in a tire is compromised.

The interior of the 2012 Toyota Highlander offers 95.4 cubic feet of total cargo capacity. There are 10 cup holders, four bottle holders, three 12-volt auxiliary power outlets and cargo area tie-down hooks. The Highlander and SE models have a shift knob with silver-painted accents and front driver and passenger assist grips. The shift knob and assist grip on the Limited model have wood-grain-style trim.