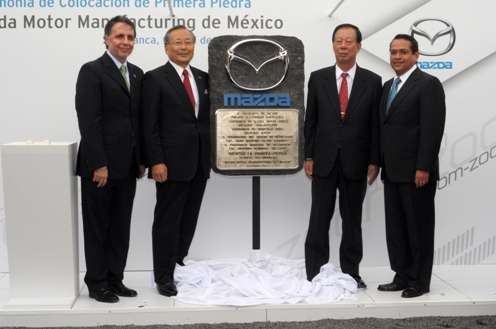 The cars will be the same as the Mazda Demio and Mazda Axela models in Japan.

The factory will be located in the city of Salamanca, in the state of Guanajuato.

Bruno Ferrari, minister of economy of Mexico, was the guest of honor at a ceremony held to mark the beginning of construction of the new assembly production facility.

The ceremony was hosted by Takashi Yamanouchi, Mazda Motor Corp.'s chairman, president and CEO, and Sumitomo’s executive VP, Kazuo Ohmori, on the site where the plant will be built.

“Since Mazda established its sales network in Mexico six years ago, we have experienced a remarkable acceptance from the people of Mexico. Last year Mazda sold over 25,000 vehicles and captured over 3% market share,” Yamanouchi said.

“We are excited to be constructing this new facility here in Mexico with our partner Sumitomo Corp. It will be vital to bolstering our expansion in Central and South America.”

Dignitaries at the groundbreaking included the Guanajuato state governor, Juan Manuel Oliva; the mayor of Salamanca, Antonio Ramírez; the general director of ProMéxico, Carlos Guzmán; the president of the Economic Commission of the State Congress, Alejandro Rangel; and Japan’s ambassador to Mexico, Shuichiro Megata. About 400 people attended the ceremony.

“The state of Guanajuato and the Sumitomo Group have a lot in common. Both were established over 400 years ago and developed through a history of mining. We also share the value of respect for people and the desire to contribute to society and grow together with our partners,” Ohmori said.

“By integrating our strengths with those of our strategic partner, Mazda Motor Corp., and those of Mexico and of Japan, I believe our joint venture will grow to become world class, and will help us to contribute to the development of both countries.”

Through the new manufacturing facility, Mazda and Sumitomo intend to combine their individual strengths to enhance both companies’ business in the rapidly growing Central and South American markets. The new facility will include both vehicle and engine assembly plants and will commence operations in the fiscal year ending March 2014 with an annual production capacity of 140,000 units, according to a statement from Mazda.

Image source: Bruno Ferrari, Takashi Yamanouchi, Kazuo Ohmori and Juan Manuel Oliva were there this month as plans for a new factory to build cars for Central America and South America were announced. Photo courtesy of Mazda.