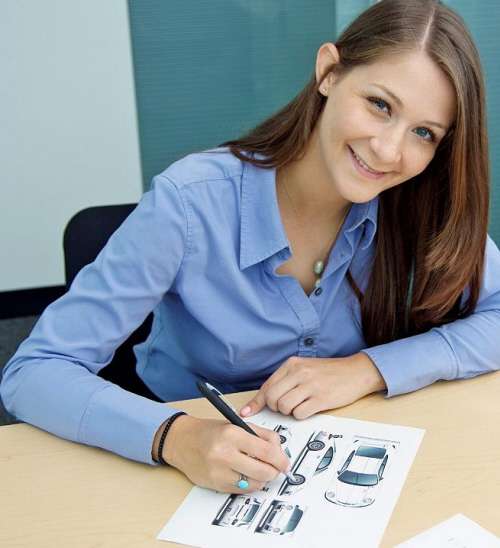 Meet the next creative force in the auto world. Porsche Cars intern Anna Frey designed the livery that appeared on a 911 GT3 Cup race car that was driven Saturday in the 200-cars-from-25-countries Porsche Carrera World Cup Race at the Nürburgring track in Germany.
Advertisement

“I am very excited my design was selected,” Frey said. “I have loved cars since I started attending car shows with my father when I was growing up.

"The opportunity to intern at Porsche has been very rewarding and exciting. And the thought of my design appearing on a Porsche race car in front of thousands of people – and (99) other Porsche race cars – is quite amazing!”

Frey is a graduate of Georgia Tech University in Atlanta near Porsche's North American headquarters. She majored in industrial design in college. Her paint scheme on the car was selected from four finalists by Porsche employees and also bested designs drafted by professionals.

American Le Mans Series GTC Champion Melanie Snow of Snow Racing was the driver of Porsche's 911 GT3 Cup car and was joined by six Porsche pit crew employees. The inaugural Porsche Carrera World Cup race, which was put on concurrently this weekend to the ADAC 24 Hours of Nürburgring Race, was documented for posterity on Porsche's "Hub" social media site.

Lufthansa German Airlines is supporting the Porsche crew with logistics and air travel to and from Germany.

“This racing endeavor is an exciting opportunity to showcase the relationship between these two iconic German brands,” said Nicola Lange, director marketing and customer relations The Americas, Lufthansa. “Our Lufthansa team is incredibly enthusiastic to be a part of the team.”

Hawke Fracassa reports news on Porsche and other performarnce cars.