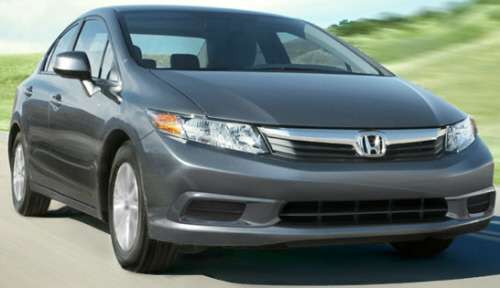 Business school instructors have forever preached that the way to succeed is to make and sell something unique. Honda, emboldened by this mantra, has taken the advice to heart with its Civic Natural Gas car, a new-and-improved version of the 28 mpg 2011 Honda Civic GX that makes its debut as a 2012 model this fall.
Advertisement

The Civic Natural Gas model has huge shoes to fill, but brings with that challenge the ambition to match. Sales for the GX that it replaces are booming, tripling in the first six months of 2011 compared with year-ago numbers.

Zeal for the car is so strong that Honda dealerships rarely have more than one or two of the cars available at any given moment because demand is through the ceiling. But the GX's distribution has been limited to just four states, to date, making it a regional niche car instead of a volume player.

"With the all-new model coming this fall, drivers will continue to earn these benefits along with additional commuter-friendly features."

For 2012 the plan is to aim higher by bringing clean-burning fuel to the masses. The hope at Honda is to make serious inroads into all 50 states and D.C. too with a car that belches out no emissions at all.

The challenge will not be delivering the cars or whetting buyers' interest. Or the challenge of overcoming Buy American types who don't care that the Civic is being assembled in Indiana.

The true challenge will be making sure there are a sufficient number of places of find the right fuel so drivers have a high comfort zone.

California drivers have phat comfort zones. This is because in Cali there are 110 natural gas stations sprinkled statewide. Not exactly the same as the volume of corner gasoline stations, but based on the number of cars with this technology, it's a heaping helping compared to, say, Detroit.

And if you follow the money as a reason to buy into what could become a Civic Natural Gas obsession, consider this: Compressed natural gas at current rates is about 30 cents less for every dollar spent on conventional gasoline. Saving money is reason enough for most Americans to consider buying this car, for people who do their homework.

What is surprising when assessing the market is that the other manufacturers either haven't caught on or know something Honda doesn't. The Detroit Three have no car like this. And the economy niche also has stood by the side of the road to see how this story line develops.

Honda, in essence, is the cheese that stands alone. It is the sole OEM in America that is selling a dedicated CNG-powered light-duty car designed and assembled for retail sale from a dealer showroom.

The next question is: What will it cost? Car companies love to tell you every statistic you never cared about, all the while leaving you to wonder: What the heck is this thing going to cost me? Well, in this instance Honda is more lemming than leader, choosing to wait until a little bit closer to game game to announce its price for the 2012 Civic Natural Gas vehicle.

But for purposes of debate and discussion, current Civics offer MSRPs ranging from $15,800 (stripped) to $26,750 (well equipped). This delivers a range buyers can weigh as they consider whether this is the car for them.

Now, about those features that make the car the car it is. This Civic is equipped with innovative features that one would find on others in the Civic family. For example, the "intelligent" Multi-Information Display marries vehicle information and personal electronics with a 5-inch color LCD display and steering-wheel controls.

Standard features include Bluetooth HandsFreeLink for cells and a USB interface for mp3s and the like. An option on the Civic Natural Gas is the Honda Satellite-Linked Navigation System with voice recognition and FM Traffic. One perk of the nav system is a locator for fueling locations.

There is nothing special under the hood, not really, with the standard Civic 1.8-liter 4-cylinder engine. But there have been forward developments on the Civic Natural Gas car, including Honda's ECO Assist technology, which usually engages at high speeds to save on power.

Drivers of the current compressed natural gas-powered Civic GX and 2012 Civic Natural Gas model will continue to have access to the High Occupancy Vehicle highway lane in California until January 2015. That might not do much for you if you buy the car in Detroit, but in the green acres of southern California, such a privilege is a real big deal if you want to get from Point A to Point B in a hurry.