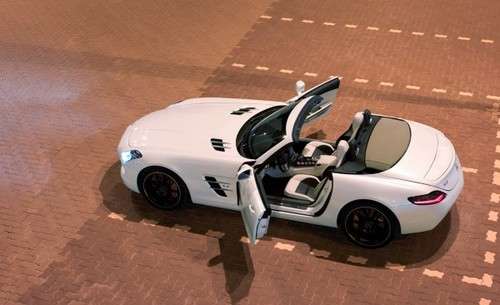 What would have Luciano Pavarotti been without his voice? What would Usain Bolt be without his speed? What would Christina Hendricks from Mad Men be without her, well... you know. Most importantly, what would the Mercedes Benz SLS AMG be without it's gull wing doors? I'll tell you: The SLS Roadster.
Advertisement

My first model car was a 1955 300SL, which as you may know, is the inspirational basis of the SLS AMG. I was five years old when I received this model and I just couldn't stop opening and closing those gull wing doors. It was unlike anything I had ever seen and it instantly became my most favorite car ever.

When Mercedes Benz released the new SLS AMG Coupe, I cried (inside of course, like a proper man should.). I knew I would never be able to afford one and that it would be so rare that I would never even be able to see one in person. I always knew, however, that if I were to suddenly find a million dollars, the first thing I'd do is buy one.

Today, Mercedes Benz officially released photographs of the convertible version of the SLS AMG, called the SLS AMG Roadster. You might be thinking it would be extremely difficult to put gull wing doors on a convertible car, and you'd be right. You see, the Roadster has conventional doors.

Conventional doors? Why?! The gull wing doors are like Cindy Crawford's mole, or Sean Connery's charm. They were the heart and soul of the car. Its defining, most beautiful and special feature.

The Roadster is every bit as powerful as the Coupe. Its aluminum body has been braced to compensate for the loss of the roof. Normally this means a lot of added weight due to the braces, but the aluminum body has only gained five pounds. The top is made out of expensive fabric, steel, aluminum, and magnesium.

I'm sure it's a great top as far as convertibles are concerned, but with the loss of the gull wing doors, so goes its magic. The Roadster then is a tiger without stripes.

If you have the money to buy one, do you yourself a favor and don't. Buy the coupe instead.