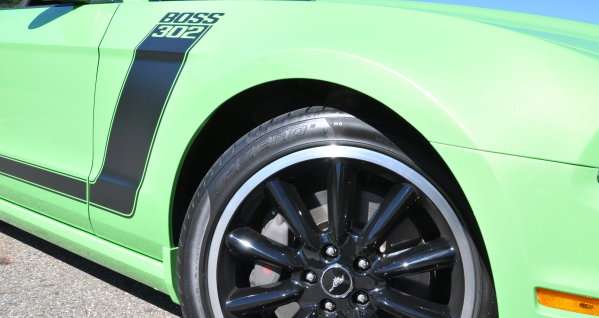 Will the 2015 Ford Mustang Boss Be a Road Car or a Race Car?

While we were so focused on the news that the 2015 Ford Mustang will almost surely come in Shelby GT350 trim with a new 5.2L V8 engine, we looked over another interesting piece of information in the dealership parts guide images posted by Mustang6g.com – the mention of a new “Boss Racing” package that has us wondering whether there could be a new Boss road car or if it will be another road racing special.
Advertisement

When the members of Mustang6g.com began posting screen shots from the Ford Motor Company dealership parts system, showing details of the 2015 Ford Mustang including the Shelby GT350 badging and information on a new 5.2L V8, it was the first information that anyone had seen that confirmed anything about the next generation super ‘Stang. Because of that, we were completely focused on those components that were unique to what many believe to be details of the 2015 (not 2016) GT350 Mustang. What we skipped over was that some of those components were also specific to another package that Ford calls the Boss Racing package.

MUST READ: Mustang Compared to 2015 Challenger and Camaro

Keep in mind, this Boss Racing package was mentioned in the parts list for the 2015 Ford Mustang…but what could it be? Is it the newest incarnation of the awesome Boss 302 of a few years back or is it the newest version of the Boss 302R race car, based on the 2015 Mustang? Today, I examine the possibilities.

Figure that the 2015 Mustang GT was designed to beat the previous Boss 302 so a modern Boss would be even better. Something like a tuned 5.0L V8 with 450 horsepower combined with a heavily sport tuned suspension package utilizing the new IRS setup would make for one wicked fast car around the corners. Strip out a few interior options and a few pounds, add a bigger braking package, unique wheels wrapped in high performance tires and throw on some badges and you have a car that the American performance community will love…just like the previous Boss 302.

Unfortunately, the “Boss Racing” description crushes my hopes of a 2015 Mustang Boss 302.

Could This Be the Next Ford Racing Boss 302R?
In case you don’t closely follow the world of road racing, many modern Ford racers who participate in the likes of the Grand Am Continental Sports Car Challenge do so in a Ford Racing Mustang Boss 302R. These cars are specifically built to conform to the rules of the Grand Am series and, most importantly, they are not legal for road use. Like the Ford Racing Cobra Jet Mustang, the Boss 302R comes with a serial number rather than a VIN, so they cannot be registered for road use, but they are powerful competitors on the track.

During a past Grand Am Challenger telecast, the announcer mentioned that we would see the next Ford Mustang race car in late September at the Circuit of the Americas race in Texas. That very could very well be this Boss Racing model for the 2015 Mustang and if that is the case, it kills my hopes and the hopes of others of seeing a 2015 Mustang Boss 302 road car.