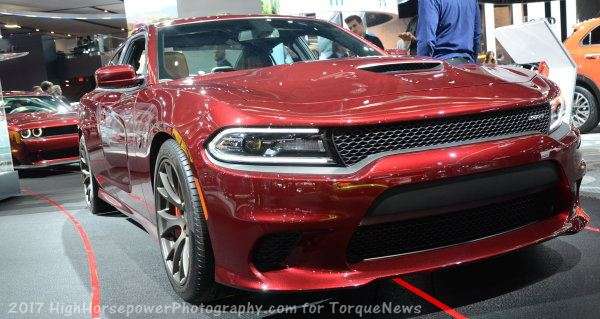 What Owners Want in the Next Dodge Hellcat Challenger and Charger

The 707 horsepower Dodge Challenger SRT Hellcat and Dodge Charger SRT Hellcat have proven to be far more popular than anyone at FCA had ever expected, but every owner can list something about his or her car that they would like to be different – and today we bring you a list of those features which current Hellcat owners would like to see in the next generation SRT Challenger and Charger.
Advertisement

However, when pooling thousands of Hellcat Challenger and Charger owners on the largest Hellcat page on Facebook, I found that the majority of them would like to see many of the same features on the next generation Hellcat Challenger and Charger. Mind you, this isn’t from owners complaining about their cars. In fact, most of them pointed out that they don’t have any issues with their 707hp Dodge muscle car, but if they had to list something that they would like to see on a future version of their vehicle – they were all able to come up with some good ideas.

Not Many Changes on the Outside
The area where the fewest Hellcat Challenger and Charger owners had ideas for changes was the exterior, with the most common requests being fog lights, a front camera, auto dimming headlights and brake calipers that match the exterior paint of the car. There were also requests for more distinct Hellcat badging, which the company added for 2017.

Performance without More Power
Since almost anyone who owns a high performance car will quickly that they would like more power, I asked the Hellcat Challenger and Charger owners to not reply with “more power” when asked what they would change. Not surprisingly, there weren’t many requests in the way of performance changes, but there were some interesting requests which make sense.

Many owners would like a louder stock exhaust system, or at least a system that is louder when the system shifts to the louder of the exhaust tone settings. The Hellcat Challenger and Charger are equipped with an active exhaust system which uses a system of valves to quiet the car at low throttle input, but owners seem to want their cars to be even louder. Along those same lines, owners want to be able to control the mode of their Hellcat exhaust systems via the touchscreen, similar to the setup offered on the Chevrolet Corvette with active exhaust.

Two of the most common modifications for Hellcat Challenger and Charger owners are wider rear tires and a stronger driveshaft, so both of those items were mentioned frequently in the discussion, as was the desire for a “burnout button”. Basically, owners don’t want to have to hold down the traction button for a few seconds to be able to do a burnout, so they would like to have a one-touch button that quickly disables the traction control system altogether. Along with turning the traction control off, a few owners recommended a built-in linelock system as well, similar to what Chevy offers in the new Camaro ZL1.

Next, in an effort to keep the engine and transmission cooler during extended periods of high performance driving, owners would like to see a dual headlight air induction system and bigger oil coolers for the transmission, supercharger and engine oil.
Finally, owners are still clamoring for a Hellcat Charger with a manual transmission, but I have a hard time seeing that, based on the current trend of high performance automatic gearboxes.

The group of owners who want better performance via weight reduction would like to see a basic (non-auto) climate control system, a simpler radio setup, cloth seats that aren’t heated, cooled or power adjustable, the complete removal of the rear seat and fewer speakers. Many people in that group would also like to see an optional roll cage, which gives you a clear picture of the owners in this group. They are looking to race – not cruising in comfort.

On the other side, we have the Hellcat Challenger and Charger owners who love the luxurious feel of their 707hp Mopar muscle car, and they would like an even more luxurious experience. The owners in that group want more plush seats with higher end leather, express-up windows, memory features for the driver and passenger seats, a more premium-feeling steering wheel, a leather wrapped dash, stitching through the cabin which matches the exterior paint, more power ports (this was a big one), adjustable pedals, a heads up display (also a very popular answer), adaptive cruise control, brighter interior lighting with the option to change the color and a better premium sound system.

It should be noted that during this discussion, lots of owners raved about the sound system in their Hellcat cars, but there were a handful of owners who would like to see an even high end sound system – one which better rivals some of the $70k luxury cars on the road.
In short, Dodge Challenger SRT Hellcat and Dodge Charger SRT Hellcat owners really don’t have much negative to say about their cars and when asked what they would like to see added for the next generation – the ideas are predominantly in the cabin. Some folks enjoy the premium cabin and want more of that while others want as little as possible in an effort to go even faster.

So, if anyone from FCA is out there reading this, these are the features which the folks who own (and love) the current Hellcat Challenger and Charger would like to see from the next generation.