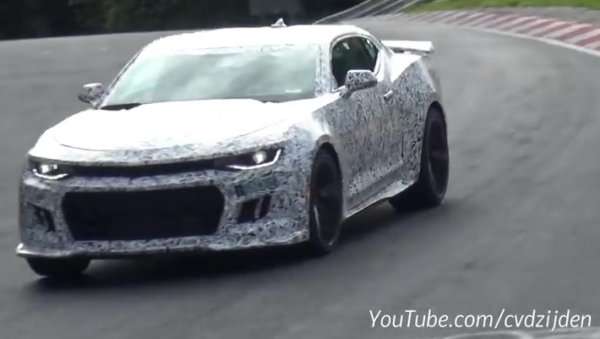 Last week I talked about my experiences in seeing what I believed to be the 2017 Chevrolet Camaro ZL1 test cars in my home town and today, we have video of the new super-Camaro soaring around the world’s most famous road course – the Nürburgring in Germany – with plenty of chances to see and hear the ZL1 flexing its muscles.
Advertisement

While we still don’t have any sort of official information on the 2017 Chevrolet Camaro ZL1 – including whether or not it will actually be called the ZL1 – we have what appears to be our first video showing the next high performance Chevy muscle car in action on Germany’s Nürburgring. This video was posted on YouTube by a user that goes by the handle CvdZijden, and this is not the first time we have enjoyed his videos here on TorqueNews, as he is one of the folks who spends time at the famous German road course with the hopes of catching hot cars in action.

This time, he certainly struck gold, as CvdZijden was able to catch the video high performance video footage of the 2017 Chevrolet Camaro ZL1.

The Camaro Six ZL1 at The Ring
This video of the 2017 Chevrolet Camaro ZL1 (or what we believe to be the 2017 Camaro ZL1) offers us four different opportunities to see the car handle a corner while also hearing the powerful V8 under the hood roaring as the car races away from the camera. In each clip, the new Camaro comes towards the camera as it enters a turn, followed by a blast out of said corner – with the roar of the American V8 clearly audible in every clip.

Also, since the car is wearing very little bulky camouflage, this video gives us all a great chance to see the basic form of the new Camaro ZL1. While it is still covered in the swirly skin that prevents us from getting a perfectly clear look at the beast, the car in action on the Ring – complete with yellow hash marks on the fenders – leaves little to the imagination.

Key Points from the Video
A few things to take note of when watching the clip of the new Camaro ZL1 below.

1.The new Camaro ZL1 sounds awesome coming and going, with an impressive roar when heading away from the camera under hard load.

2.Oddly, I cannot hear the whine of a supercharger as the Camaro ZL1 approaches. It is expected that the ZL1 will be powered by the same supercharged LT4 V8 that was introduced in the C7 Corvette Z06, but that blower announces its presence when approaching under hard throttle. It isn’t quite as loud as the Hellcat Hemi Challenger’s blower whine – but the sound is there. With this Camaro, I cannot hear any blower whine as the car approaches the camera and I find that to be odd.

3.This Camaro ZL1 almost surely has an automatic transmission. There aren’t many shifts that we can clearly hear in the video, but there are a few during the first clip as the car accelerates away from the camera and based on those, this car packs the 8-speed automatic transmission. I suppose that the driver could be that good, but those shifts sound automatic-smooth to me.

4.Not surprisingly, the new Camaro ZL1 seems to handle the hard corners of the Nürburgring pretty well, with only a little brake lockup early in the video.

5.I would imagine that at this point, the Camaro ZL1 shown in the video below is being worked out for suspension and chassis tuning – not making a record run. The track appears to be very crowded and at times, the Camaro enters and exits the turn a bit softer than I would expect from a record run, so this is likely a tuning or testing exercise by the engineering team.

Anyways, enough with the chatter – crank up your speakers and enjoy this video of the 2017 Camaro ZL1 working out at the Nürburgring.