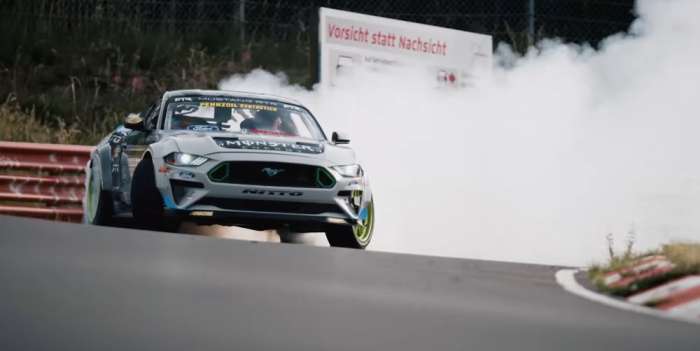 Vaughn Gittin Jr recently took his Ford Mustang RTR drift car to the Nurburgring in Germany and the legendary sideways-driver became the first-ever person to drift the entire 12.9-mile road course – with the amazing run captured on video, of course.
Advertisement

Vaughn Gittin Jr is one of the best drivers in the history of drifting while also being the most decorated American drift racer ever. With his Ford Mustang, Gittin has shined bright in the competitive world, but he has also shown off his sideways driving skills in a variety of stunts, including racing around Inner Mongolia in a pony car.

Gittin Hitting the Ring
This time, Gittin headed to the Nurburgring in Germany with his RTR Mustang race car with the intention of drifting around the entire 12.9-mile track. He first made the attempt last year, but rain ruined the fun, forcing him to instead play around on the German road course in an F-150 Raptor. However, when his team hit “The Ring” this year, they had clear skies and a chance to set a unique record.

Vaughn Gittin Jr drifted his entire way around the Nurburgring, making him the first person ever to do so.

"The Nordschleife is one of, if not, the most iconic track in the world and I have been in love with the danger and folklore of the famous Green Hell at the Nürburgring since I can remember," Gittin Jr. said. “Drifting the Nürburgring represents the ultimate challenge to me: it is something that many questioned whether it would be possible and whether the car and driver could do it and come out in one piece. Something inside of me had to take this on to find out.”

In the video below, we don’t get to watch his full lap of the Nurburgring, but we get the highlights of Gittin’s race-ready Mustang sliding and soaring around the famous German road course. At times, Gittin spins the car completely around on straightaways and from time to time, the back end gets off into the grass and dirt. What might be the most impressive aspect of this video is that the rear tires were able to stand up to 12 miles of rolling burnouts, but in the end, it is a cool claim for Gittin and a great video for those who love the roar of American muscle cars.