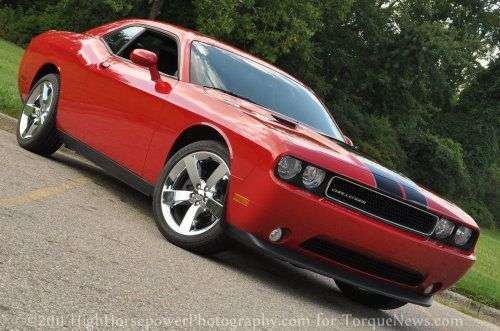 While the Hemi powered Challenger R/T and SRT8 392 might get the lion’s share of attention, the new 3.6L Pentastar V6 adds some much needed power to the entry level 2011 Dodge Challenger and the Rallye package allows it to look a great deal like the more powerful counterparts packing V8 engines.
Advertisement

The 2011 Dodge Challenger really didn’t see many changes over the 2010 models with the exception of some very minor aesthetic alterations as well as some new features but the biggest news for the 2011 model year is the addition of the new 6.4L Hemi for the SRT8 models and the 3.6L Pentastar V6 for the entry level Challenger. For those opting for the premium SRT8 models, that means that you get more opponent-crushing power but for those buyers who want the classic-yet-modern look of the 2011 Dodge Challenger without the higher horsepower, higher fuel consumption and higher price - the addition of the powerful 3.6L V6 is a massive improvement over the previous V6 option.

When the first entry level V6 version of the Dodge Challenger was introduced in 2009, it was powered by a 3.5L V6 that offered a mere 250 horsepower and 250lb-ft of torque – hardly enough to make the husky Challenger fun to drive. However, with the introduction of the Pentastar V6 that had found a home in nearly every modern Chrysler product, the 2011 Dodge Challenger V6 models finally have the muscle to make it deserving of the muscle car title. The Challenger application of the Pentastar V6 is the most powerful version offered, packing 305 horsepower and 268lb-ft of torque while still offering fairly impressive fuel economy numbers.

I am of the mindset that when you are buying a muscle car, whether it has the entry level engine or the most powerful engine offering, fuel economy should take a backseat to pretty much everything else but since many people rank MPGs a little higher than I do, I did a few simple tests to check the real world fuel economy of the new 2011 Challenger V6 Rallye. I should start by saying that I have a fairly heavy right foot and when driving a car – especially a muscle car – I am looking to push the limits of its performance capabilities. During my first tank of gasoline, I spent lots of time letting the Pentastar “stretch its legs” both around town and on the open road, and the result was a fuel economy output of right around 22mpg which I considered to be more than impressive. This was also within a few tenths of what the on-board information system claimed for the fuel economy during those miles. However, when I took the V6 Challenger out for a 150 mile highway run, the fuel economy of the Pentastar really came through as when setting the cruise at 70mph, the information center rarely moved away from 30 miles per gallon. In fact, on other highway runs I was able to set the cruise control at speeds well above what the normal person would consider sensible and still achieve fuel economy numbers in the ballpark of the 27mpg expected by the EPA on the highway.

Now, onto the good stuff.

The 2011 Dodge Challenger V6 Rallye packs 305 horsepower – 5 more ponies than the 2009 Ford Mustang GT and the same output as the current V6-powered Ford Mustang. This is also 55 more horsepower than the previous V6 Challenger and without being too hard on the ol’ 3.5L mill – it just wasn’t enough for the Challenger. Heck, I’ve put a pretty sound beating to a 2009 Challenge SE in my Dodge Ram Quad Cab but with the new Pentastar V6, the performance levels rise to a far more acceptable level. Reports from various sources indicate that the 2011 Dodge Challenger V6 Rallye will dash from 0-60 in just over 6 seconds (more than a second quicker than the old V6) while clipping through the quarter mile in the mid to high 14 second range. Also, unlike the Ford Mustang that is electronically governed to 113 miles per hour, the base model Challenger is more than willing to get up around 130 with the feeling like it had more to offer but we were running out of space on the test track. As a matter of fact, during the top speed runs, the V6 Challenger was going faster in 4th gear than the 2011 Mustang V6 will go without the help of an aftermarket tune.

Along with pumping out over 300 horsepower, the Pentastar V6 in the 2011 Dodge Challenge Rallye has a nice grumble to it that is best heard at lower RPM. Once you get into the higher RPM, the high revving engine is more audible than the exhaust which I expect is by design since so many American performance guys want to avoid “the V6 sound”. I, on the other hand, love the sound of the Pentastar and I bet that a opened up exhaust system would sound great – albeit a little higher pitched than the Hemi. The nice thing for those who don’t want the same obnoxiously loud muscle car that I do is that when cruising on the highway, the engine is whisper quiet. When cruising at highway speeds with the windows down and the sunroof open, you can barely hear the engine and until you really climb into it, there is very little engine or exhaust “noise” heard inside.

My 2011 Dodge Challenger V6 Rallye tester was equipped with the $1,500 Super Sport Group (SS/T) package which adds a 3.06 rear gear, performance brakes, performance steering, performance suspension, and a set of all season performance tires wrapped around the 20” chrome wheels of the Rallye package. The addition of the tuned suspension setup is a great improvement over the 2010 model, providing better handling than the previous models without making for a rough ride. The suspension nicely balances comfort and handling and when combined with the sport-tuned steering and performance brakes, the 2011 Challenger Rallye is ready and willing to cut through even the tightest turns. Dodge has put a great deal of effort into improving the suspension setups of their cars to offer a more comfortable ride without compromising performance and the 2011 Challenger Rallye with the SS/T package is a glowing example of the gains made by the Dodge engineers.

The few downsides to the 2011 Dodge Challenger Rallye are that it is a little bigger than its cross town competition so it is a bit heavier and with that, a bit slower. However, that added size means that unlike the V6-powered Ford Mustang and Chevrolet Camaro, you can actually seat four people in the Challenger without crushing the rear-riding passengers. Also, I would absolutely love to see a manual transmission offered as based on my experiences with the manual versus automatic V6 Mustang, being able to row your own gears would improve the performance a bit – and I prefer my sports cars to have the third pedal.

Overall, while I love the power oozing from every pore of the new Challenger SRT8 392, the new Pentastar V6 in the 2011 Dodge Challenger Rallye makes this a great entry level muscle car. For those who want to rock the look of the American muscle car without the higher costs of the Hemi-powered models (plus the gas, insurance, etc), the 2011 Challenger V6 Rallye with the SS/T package is an ideal choice – offering an exterior look similar to the pricier Challenger R/T but with slightly less power and a lower price.

It is no secret that I love American muscle cars and it is exciting that entry level models from each of the Big 3 have gotten the power to be able to lay claim to being muscle cars in their own rights. The new Pentastar V6 has impressed me in every new vehicle I’ve driven and with the 2011 Dodge Challenger application, the 305 horsepower V6 is a glowing example of Chrysler’s ability to design and build great engines.