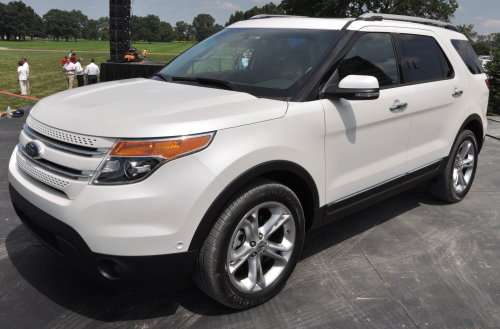 TorqueNews review of the 2011 Ford Explorer

We have talked about the new Ford Explorer quite a bit this year, from the impressive fuel economy of the initial models to the high tech MyFord Touch infotainment system to the introduction of a 4-cylinder EcoBoost but beyond all of that, can the new unibody-based Explorer live up to the rugged sport utes of the past?
Advertisement

Prior to the current Ford Explorer, Ford’s tried and true sport utility vehicle has been based on a truck chassis with the top of the line engine being a powerful V8 engine but when the 2011 Explorer was introduced, the truck frame was gone in place of a new unibody design with the most powerful engine being the 3.5L V6. As soon as the lack of a V8 and the unibody design were official, some rabble rousers began doing their thing but Ford was quick to point out that the new Explorer can do anything that the older versions can. The new V6 offers more power than the older V8 and thanks to the lightweight construction, this drivetrain also offers better fuel economy than the previous versions – all without compromising the abilities of the popular SUV including towing up to 5,000 pounds.

First off, while the 2011 Ford Explorer might look smaller than the outgoing Explorer, there is more than enough room for four adults, two children and a fair amount of cargo. The electric folding third row of seats allows for gobs of storage space with the area under the seats (when they are in their upright position) is perfect for keeping groceries from sliding around the cargo area. That same area allows you to fold the third row of seats into the floor for a very large, flat cargo area and if you go one step further, folding down the second row of seats – you have just about as much room as you do in a pickup truck with a cap. We also found out that with the second and third rows of seats folded flat, there is enough room for an adult to spread out and sleep so the Explorer could also serve as a warm, dry bed on a rainy hunting or fishing trip.

My 2011 Ford Explorer test vehicle was equipped with MyFord Touch and while some might have bad things to say about this high end infotainment system – spending some time learning the system makes all the difference. At first glance, MyFord Touch does have a great deal to it but after spending about an hour poking around in the different features, I found that it was very simple to use the various functions including the voice system. Is it more difficult to use than the standard cassette deck and AM/FM stereo in your car from the 80s? Yes…but it also does more than just about any automotive system I’ve seen. Those who have a hard time figuring out how it works might be a little technologically disadvantaged but those owners who are patient and spend some time playing with the system while parked in their drivetrain will surely have a far better experience. Honestly, as soon as I began driving the new Explorer, I was blown away at the number of complaints because I really enjoyed the MyFord Touch system and should I buy a new Ford product soon, I will definitely opt MyFord Touch.

The 2011 Ford Explorer performed beautifully during regular driving conditions, providing a nice smooth ride and impressive acceleration for such a fuel efficient SUV but what about less than ideal conditions? The advantage of the older Ford Explorer was that it could do pretty much anything and go pretty much anywhere that a truck could so while driving the new Explorer, I used it for one of the more demanding tasks that my own pickup truck deals with – going to a horse show. This including packing the interior to the brim and hooking up a 4,300lbs trailer; then driving along some brutally unpaved roads en route to the venue. The 2011 Explorer was the first vehicle (non-pickup) that we have used that would accommodate my wife’s huge horse show trunk and all of the items (folding tables, chairs, etc) in a single trip. Once we had the interior packed full of stuff, I removed the panel that hides away the trailer hitch assembly including both a 4 and 7 pin harness connection so my horse trailer plugged right into the Explorer. Even though the horse trailer and interior cargo put the 2011 Explorer very near its capacities, the Explorer performed very nicely both in acceleration and braking. The SUV never felt like it was being overworked and during our 30 mile drive to the venue, the Explorer exceeded my expectations.

On the second day of the horse show, we were faced with rain all night that turned the 10 miles of unpaved roads between civilization and the horse show into a giant mud bog. We are talking mud deep enough to hang up some cars and small SUVs but with the use of the Explorer’s selectable traction system, the new full sized sport ute did amazingly well. In fact, I would go so far as to say that scooting along those deep-with-mud country roads was enjoyable and as we zipped through these sloppy roads – I channeled my inner Ken Block…except rather than a 650hp race-built Fiesta going 100mph I was in a 290hp Explorer going somewhere in the area of 35mph…but it was still a great deal of fun.

When the time came to head back to our stables, we hooked the 2011 Ford Explorer back up and even with the muddy roads and the low speed required during towing our great grandson of Secretariat, the Explorer made short work of the miserable towing conditions. We saw quite a few other small sport utes who had to resort to “4 low” to get to the paved roads, our Explorer had no issues whatsoever in a normal 4WD mud mode.

After spending a week driving the 2011 Ford Explorer through a variety of conditions I can confirm that Ford is 100% honest in saying that the new Explorer can do anything that the old, truck-based SUVs could do. Regardless of the fact that it is a unibody vehicle with a 3.5L V6, the 2011 Explorer is very able in poor driving conditions even when fitted up with a trailer. Even better, I averaged slightly better than the EPA estimated 19mpg combined when not towing and the tank of gas that was burned with the trailer hooked up was still similar to what I get with my 400 horsepower Hemi-powered pickup.

There isn’t much more that I could ask of the 2011 Explorer on the inside and while the 3.5L V6 is a great engine, I am a speed freak who would like a little more power. Ford has some incredible V8 engines in their portfolio right now that would make for an even more powerful SUV but in reality, the majority of consumers looking at the new Explorer will appreciate the added fuel economy more than they would need the extra cubic inches and power. If you are on the market for a large SUV, the 2011 Ford Explorer should be on your short list as it offers the fuel economy and interior space of a large sedan with the towing and hauling capabilities of a smaller truck or any other large SUV.