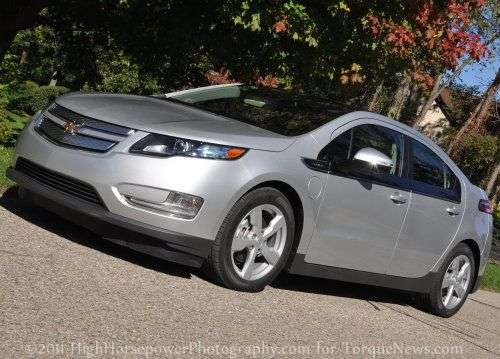 We brought you the news last week that the NHTSA had stepped up an investigation into the safety of the high voltage lithium ion batteries and today, it looks as though the feds could introduce new legislation pertaining to electric or hybrid vehicles after those vehicles have been wrecked.
Advertisement

Update: TorqueNews had a chance to speak with Rob Peterson of General Motors who confirmed that the Chevrolet Volt "involved" in the two residential fires were burned in the fire but the Fire Marshalls in both cases ruled that the Volt was not at fault for the fires themselves. That being said, it was merely a coincidence that the cars which caught fire in those garages were Volts.

The most recent issue occurred when a 2011 Chevrolet Volt that had been used for crash testing caught fire while sitting in an NHTSA overflow lot – three weeks after the car had been wrecked during testing. The concern by the NHTSA is that when these lithium ion batteries are damaged in an accident, there is an increased risk of fire hazards to the first responders who arrive to assist with the accident along with those who handle the vehicle after the wreck, such as tow truck drivers and owners of the salvage yards where these wrecked EVs are sent.

General Motors points out that they recommend that when charged, the lithium ion battery in the Chevy Volt should be drained as soon as possible after the accident and after the NHTSA performed the crash testing on the Volt, the battery should have been drained. Right now, General Motors sends a team of specially trained technicians to drain the Voltec battery but the technology to do this could be available within the next year to dealerships around the country. Also, General Motors has worked with the National Fire Protection Agency to train over 10,000 first responders who know how to properly deal with wrecked. GM's Rob Peterson explained the following about the training for these first responders: "Their protocol is to isolate the energy in the battery at the scene of an accident. This is accomplished by simply pulling the manual service disconnect or cutting the wires in a specific location. This action allows first responders to safely do their job. The vehicle can then be removed and de-energized elsewhere - eventually by a dealership, salvage yard or other entity who takes possession of the vehicle."

In any case, while the Chevrolet Volt has become the catalyst for this investigation, GM holds firm that after the Volt is wrecked, the battery should be drained and the NHTSA may make that recommendation a requirement. At the same time, you would think that a battery supposedly costs over $10,000 wouldn’t just be left to rot in a junkyard car after the vehicle is wrecked but in the case of the salvage yards, they should be able to shoulder some of the responsibility of the battery disposal since they are the ones who stand to profit from having and selling components. The good news is that these incidences have allowed GM to collect batteries that were damaged in real-world accidents (or NHTSA testing which is intended to simulate real-world accidents) to see the effect of the impact on the batteries and the damage done to these units. Also, GM has been working with the global power distribution company ABB to develop use for these batteries once their time in the Chevy Volt has come to an end.

However, for people like the police officiers, EMTs, firefighters and other first responders to an accident, having to worry about the massive battery bursting into flames minutes after the impact posts a very real risk that the NHTSA will surely address after their investigation into this technology.

apeweek wrote on November 15, 2011 - 11:13pm Permalink
Really, three Volt fires? The Volt was cleared in the first garage fire (Connecticut) by the fire marshall: http://gm-volt.com/2011/05/18/exclusive-chevrolet-volt-unofficially-cleared-in-connecticut-garage-fire/ The second garage fire was also not caused by th eVolt: http://www.greencarreports.com/news/1068564_fire-marshal-says-nc-garage-fire-started-away-from-chevy-volt-exclusive And the third fire, reported here, did involve a burning Volt battery, but it took three weeks to start in a damaged battery. Would you drive around with a hole in your gas tank for three weeks? Because that's how dumb this story is.
Volt Owner wrote on November 16, 2011 - 3:54pm Permalink
Sensationalism. What is being sold here that reporting has been supplanted by sensationalism? How can an organization that uses 'news' in their name create an article titled "Third Chevrolet Volt fire could bring about new EV regulations" while in only one case a Volt was the source of a fire? And in that case, it was with a battery that was purposely damaged, then 3 weeks after, the testing organization neglected to use the proper safety procedure, it was the source of a fire. Additionally, how can torqueNEWS write "caught fire while sitting in an NHTSA overflow lot – three weeks after the car had been wrecked during testing"... then write "..people like the police officiers, EMTs, firefighters and other first responders to an accident, having to worry about the massive battery bursting into flames minutes after the impact posts a very real risk... ". Did the person wrting the last part of the article not notice the THREE WEEKS AFTER part at the begining of the article. There are over 200,000 vehicle fires annually in the US, yet 1 Volt, after a controlled test where its battery was not properly handled somehow made NEWS??
Anonymous wrote on November 19, 2011 - 9:42pm Permalink
is your chevy volt ( BURNING DOWN THE HOUSE)