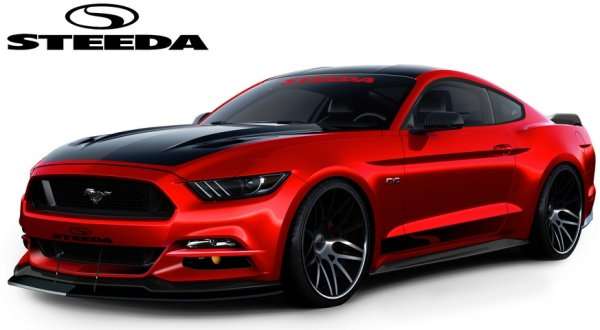 The Steeda 2015 Ford Mustang is the Most Powerful Yet

We have already seen several beefed up versions of the 2015 Ford Mustang from various tuning companies around the country, but the new Steeda Q Series Mustang appears to be the strongest horse in the stable – with output reaching up to 775 horsepower.
Advertisement

In the world of high performance Ford Mustangs, Steeda is best known for their suspension components, but more recently, Steeda has gotten into creating whole high performance packages for the mighty Mustang. While they don’t get the same attention as the Saleen Mustang or Roush Mustang, the Steeda Mustangs have offered comparable levels of performance in past generations. However, with the introduction of the newest Q Series Mustang, the Steeda brand has stepped out ahead of the crowd with the most powerful tuning package for the 2015 Mustang thus far.

The 2015 Steeda Mustang Q Series
The details on the Steeda Q Series for the 2015 Ford Mustang is fairly limited right now, but we know all of the major details. Since it is a Steeda Mustang and the Steeda name is known for superior handling, the 2015 Q Series Mustang features a Steeda G/Trac suspension and chassis modifications that are expected to offer incredible road hugging abilities while also giving the car a far more aggressive stance around the unique wheel/tire package.

As you can see in the image above the Steeda 2015 Mustang also wears a unique front fascia with an integrated splitter, which Steeda designed with extensive wind tunnel testing efforts so this new front end is as functionally perfect as it is good looking. Finally, the rear end of the Steeda Mustang wears a large rear wing that looks similar to the design found on the new Chevrolet Corvette Z06. When combined with the Steeda decals all over the exterior, the new fascia, spoiler and wheels give this 2015 Mustang GT a beautiful, high performance look.

Most importantly, the 2015 Ford Mustang Steeda Q Series features a range of engine upgrade packages that offer 480, 650 or 775 horsepower. Details on how they got to those numbers are scant, but I would expect that the 480 horsepower package is little more than exhaust, intake and tuning modifications while the 650 and 775 horsepower models almost certainly rely on forced induction – presumably a supercharger setup.

The 2015 Steeda Mustang is the King of the Paddock
With the announcement that their new Q Series package for the 2015 Ford Mustang would offer up to 775 horsepower, the Steeda package is the most powerful option for new Mustang GT owners right now. The next most powerful option is the Hennessey package for the new Mustang, which delivers 717 horsepower and the Saleen Mustang is next in line with 640 horsepower. The Roush RS3 Mustang will deliver at least 600 horsepower, but so far the power figures for the Roushcharged 2015 Mustang have been left at “600+” – so I don’t know exactly how much power it will make when it arrives. However, with the promise of at least 600, I would expect that it will fall short of the Steeda Mustang’s 775hp.

In other words, if you are buying a 2015 Ford Mustang GT and you want a tuning package with the most power possible – the Steeda Q Series is the top option right now.