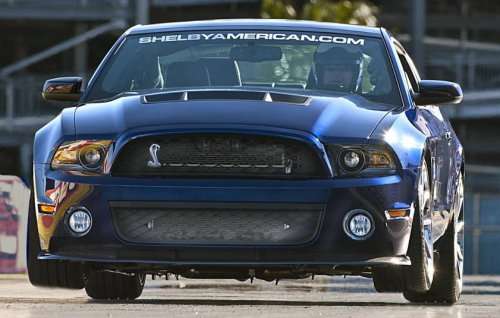 While the ultra high performance Ford Mustang built by Shelby American made its online debut in pictures that turned out to be photoshopped, the 2012 New York Auto Show brought the incredible new Shelby 1000 Mustang into the public eye for the first time at the same auto show that introduced the world to the Shelby name back in 1962.
Advertisement

The 2012 New York Auto Show marks the 50th anniversary of the first time a Shelby vehicle appeared at a major auto show - with the original Shelby Cobra debuting in New York in 1962 – so for the 2012 event Shelby American wanted to do something very special. The result of his vision was the new Mustang GT500-based Shelby 1,000 which comes in street form with 950 horsepower while the track only version packs a whopping 1,100 horsepower; both of which make this the most powerful street legal Mustang ever produced by Shelby (or Ford).

"We launched Shelby American with the Cobra at the 1962 New York Auto Show," said Carroll Shelby. "The 289 Cobra was considered pretty radical at the time. For our return 50 years later, I wanted something just as incredible that will show how far we've come and where we're headed for the next 50 years."

The team at Shelby American began working on the Shelby 1000 in 2011, shortly after completing the production version of the GT500 Super Snake. The Shelby folks realized that if they can squeeze 800 horsepower out of Ford’s standard production GT500; they could make even more power with some more work. However, in building the Shelby 1000 Mustang up to offer 950 and 1,100 horsepower – there was far more than just swapping a few items.

The build began by taking the supercharged 5.4L V8 from the Ford Shelby GT500 and tearing it down to the bare block. Shelby’s engineers added a new forged crankshaft, pistons and connecting rods to handle the boost needed to make around 1,000hp before turning to the cylinder head design. The cooling efforts of the engine were enhanced and the exhaust portion of the cylinder heads were improved to handle the added stress and heat of this monstrous motor. Finally, Shelby turned to a pair of high volume superchargers – a 3.6L unit from Kenne Bell or a massive 4.0L blower from the folks at Whipple. All of this power is funnel through a specially designed Tremec manual transmission and a heavy duty driveshaft to a massive 9” rear end built to handle over a thousand horsepower.

Next, high performance brakes with 6 piston front calipers and 4 piston rears were added to help the Shelby 1000 get stopped and to make sure that it handles as well as it accelerates, Shelby has worked with Ford Racing to design a unique suspension package to help make the most of all of that power. Finally, the Shelby 1000 Mustang receives a special body dressing that includes a unique hood, front fascia, rear fascia and rear spoiler – all of which add as much performance capacity as they do aesthetics.

Congrats to the folks at Shelby for their 50th anniversary of turning out some badass cars and here’s to another 50 years, beginning with the awesome new Shelby 1000 Mustang.

Check out the gallery of the Shelby 1000 by clicking any of the thumbnails above. This image shown above is the “wheels up” picture that created all of the controversy but fake or not – it is awesome and deserves to be shown off. All images courtesy of Shelby American.