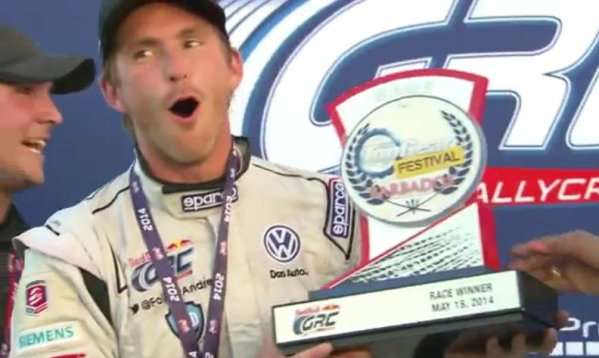 Scott Speed started the 2014 Red Bull Global RallyCross season in the same fashion that he started his 2013 season – with a big event win outside of the United States – but this time his win was in the Andretti Autosport Volkswagen Polo rather than the OMSE2 Ford Fiesta ST that he drove to victory last season.
Advertisement

Scott Speed entered the 2013 Global RallyCross season as the driver of a “Star Car” – a Ford Fiesta ST prepared by OlsbergsMSE – and he performed so well in his GRC debut that he went from being a sort of celebrity driver running one event to being a full time driver in the series. Speed won his heat race in Foz do Iguaçu Brazil and went on to win the final race as well so in his GRC debut, he did literally as good as he could have hoped. While much of the rest of his 2013 GRC season go all that well with a best finish of 7th through the 2nd through 7th races of the season, Speed raced to victory in Charlotte after making that final run by winning his heat race. Speed followed that win in North Carolina up with a heat win at the final event of the season, but he was forced to settle for a disappointing 9th place finish en route to a 5th place finish in the final 2013 GRC championship standings.

Scott Speed’s strong run in the first race of the 2013 Global RallyCross season allowed him to tie up a ride of the remainder of the season and his strong runs in both Charlotte and Lax Vegas allowed the former NASCAR, Formula One and IndyCar driver to secure a new ride for the 2014 season. With the introduction of the new Red Bull series sponsorship, Andretti Autosport announced that they would be fielding two teams of Volkswagen rally cars for the 2014 Global RallyCross season and along with former GRC champion Tanner Foust – Scott Speed would help Andretti break into the world of American rallycross racing.

Needless to say, Scott Speed helped Andretti’s new Volkswagen teams get exactly the start to the season that they would expect, with a heat win for Speed followed by a win in the final race of the event. Things didn’t go quite as well for Speed’s teammate Tanner Foust, who looked strong in the seeding rounds but the 3 time champion failed to make it through to the final round after running into a tire problem in his qualifying heat race and a 10 second penalty in the Last Chance Qualifier (LCQ).

Behind winner Scott Speed, Steve Arpin claimed his first ever GRC podium spot in second while Brian Deegan grabbed third – both of which were in Ford Fiesta ST race cars. Nelson Piquet Jr finished 4th in his new Ford Fiesta ST and former GRC Lites driver Joni Wiman had a strong GRC Supercars debut as he rounded out the top five. Fan favorite Ken Block was strong all weekend, but as he battled with Joni Wiman on the last lap of the final race, Block clipped a curb and put his Monster Energy Ford Fiesta on its lid. Ken was fine – but his race was over as he had to settle for 10th place.

Three drivers failed to make it through to the final race in the first event of the 2014 Red Bull Global RallyCross season – Tanner Foust, newcomer and New Zealand rally racer Emma Gilmour (who is also the first woman to compete in the GRC) and Bucky Lasek. Sverre Isachsen was the best placing Subaru in a disappointing 6th while Rhys Millen was (as usual) the best finishing Hyundai in 7th.

Those who have followed our Global RallyCross coverage over the past few years might find this piece to be relatively uninformative and that is because I – like so many other GRC fans – was unable to watch this weekend’s race. The race will be broadcast this coming Saturday at 1pm on NBC and there was no live broadcast so unlike previous years where you could catch the action on ESPN online or on Xbox Live – we are all forced to wait a week to watch a race for which we already know the results. Hopefully that will not be a regular occurance throughout the rest of the 2014 season, as it makes it tough to get amped up for a race when the results were announced a week earlier. In any case, you can catch all of the racing action from the first event of the 2014 Red Bull Global RallyCross season this Saturday at 1pm on NBC.